Taxes on Fireworks: Is Your State a Dud?

A handful of states impose special excise taxes on the sale of consumer fireworks. 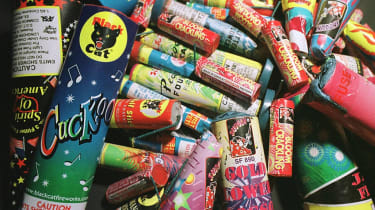 It's not really the Fourth of July without the flash, boom and crackle of a good fireworks display. Some people love the crowds and grandeur of a big-city extravaganza, while others prefer a community display at the local volunteer fire department. Then there's the backyard fireworks master who provides an Independence Day show for the neighborhood. If that's you, then it's time to stock up on the roman candles, bottle rockets, sparklers and other pyrotechnics you'll need for an unforgettable display. Just beware the explosive tax bill that some states impose!

In 2018, the U.S. pyrotechnics industry raked in $945 million in consumer fireworks sales (plus another $360 million in sales to professional pyrotechnicians). It's hard for some state lawmakers to see those types of revenue figures and not want a piece of the action for their state's coffers. Most states have resisted the temptation, but five states have slapped state-wide excise taxes on the sale of fireworks. Their special "fireworks tax" rates range from 5% to 12%—and that's on top of the regular state and local sales taxes imposed where the fireworks are sold. If you're spending hundreds of dollars (or more???) on your backyard fireworks display, the extra taxes can add up quickly. If you live in one of the states that imposes a special tax on fireworks, it might be worthwhile to drive to another state where taxes on firecrackers aren't as high. The extra cost for gas could be far less than the taxes you'll save.

Check out the table below to see if your state imposes a special excise tax on fireworks.

President Trump issued an executive order to suspend the collection of Social Security payroll taxes. How much could it save you?
When Are 2020 Estimated Tax Payments Due?

If you're self-employed or don't have taxes withheld from other sources of taxable income, it's up to you to periodically pay the IRS by making estima…
Skip to ContentSkip to Footer