Take these steps if you think you're a victim of tax fraud. 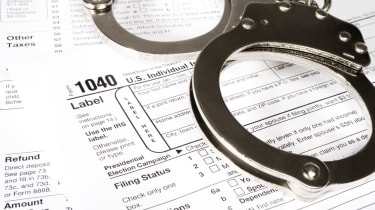 Mac McKerral knew something was wrong when he recently got a letter from the IRS stating that it was unable to electronically deposit his refund into his bank account. “I never get money back,” he says. Plus, he had yet to even file his 2014 federal tax return.

Shortly after he received that letter, he got another that said the IRS was conducting a review of questionable income amounts and claims for credits listed on his return. He then thought he was being audited – until he read further. The letter outlined a list of steps he could take if he thought a return had been fraudulently filed in his name. That’s when he realized he had become a victim of identity theft.

McKerral, who lives in Bowling Green, Ky., was among the tens of millions of Anthem health insurance members whose personal information was stolen in a massive data breach by hackers. It could be a coincidence that a fraudulent tax return was filed in his name following the breach. But he says at least 80 of his colleagues at Western Kentucky University, who also are Anthem members, have reported that fraudulent returns have been filed in their names this year as well. Officials in several states have urged Anthem customers to file their tax returns as soon as possible.

Certainly, victims of the Anthem data breach (or any other data breach in which your Social Security number was stolen) should be on the lookout for signs of tax fraud. But this sort of crime could happen to anyone at any time – and it does. Since 2011, the IRS says it has stopped 19 million suspicious returns and prevented more than $63 billion in fraudulent refunds from being issued. However, identity thieves still manage to get past IRS filters. The U.S. Government Accountability Office found that the IRS paid $5.8 billion in fraudulent refunds in 2013.

The IRS initiates contact with taxpayers with a letter, not a phone call or email (which could be a sign of a scam). You could be a victim of tax fraud if you receive a letter regarding a refund or tax owed for a year that you didn’t file a return or a letter stating the your return is under review. A notice from the IRS stating that its records indicate you received more wages than you actually earned or your state or federal benefits were reduced or cancelled because the agency received information reporting an income change also could indicate that you’re a victim of fraud. And, of course, a letter stating that more than one tax return was filed in your name is a red flag.

Respond to any notice you receive in writing from the IRS by following the instructions you are given. If you receive an official "5071C Letter" asking you to verify your identity with the IRS, you should use idverify.irs.gov to answer a series of questions that will determine whether you filed a return that is in question.

If you attempt to file your return electronically and get a message that a return already has been filed under your name or Social Security number, file your return by paper along with an Identity Theft Affidavit, advises an IRS spokesperson. After the IRS receives Form 14039, Identity Theft Affidavit, a typical tax fraud case can take up to 120 days to resolve. If you are owed a refund – even if a refund already was issued to someone who fraudulently filed a return in your name – you will receive your money within a few days after your fraud case has been resolved, the spokesperson says. For more information, see the Taxpayer Guide to Identity Theft.

File an identity-theft report with the local police. Hang on to a copy of the report because you might need it to support your case with the government and creditors that you are a victim of identity theft. Also file a complaint with the Federal Trade Commission at www.consumer.ftc.gov of by calling 877-438-4338.

Place a 90-day fraud alert on your credit report by notifying one of the three major credit bureaus: Experian, Equifax or TransUnion. A fraud alert means that lenders must take extra precautions to verify your identity before granting credit in your name. A security freeze takes it a step further by preventing credit reporting agencies from releasing your credit report without your consent. This can prevent identity thieves from taking out new credit in your name, even if they have your Social Security number and other personal information. You can place a security freeze on your credit report through the three bureaus for a fee of up to $10, depending on the state where you live. You’ll also have to pay a fee to lift the freeze temporarily if you want to apply for credit yourself.

Consider signing up for an identity-theft service, which will alert you if your personal information has been misused or if someone has opened a line of credit in your name. The service also will assist you with resolving identity-theft issues. See Identity-Theft Monitoring Programs Worth a Look for more information. If your Social Security number has been stolen, you will have to watch for signs of fraud – with the help of a paid service or on your own – for the rest of your life.

Miss the Tax Deadline? What to Do If You Forgot to File Your Taxes

Miss the Tax Deadline? What to Do If You Forgot to File Your Taxes

If you owe Uncle Sam money, filing your tax return late (or never) can come with costly complications.
How Long Should You Keep Tax Records?

How Long Should You Keep Tax Records?

Save your tax documents at least until the time limit for an audit runs out—and hold on to some records even longer.
Tax Extension: How to Get More Time to File Your Tax Return

Tax Extension: How to Get More Time to File Your Tax Return

If you can't wrap up your tax return by today's deadline, it's easy to buy yourself more time.
Pros and Cons of Getting a Tax Extension

You can easily extend your tax return due date from July 15 to October 15…but should you?
Skip to ContentSkip to Footer