Best Tech Gifts for the 2015 Holidays

The top tech products to give and receive this holiday shopping season. 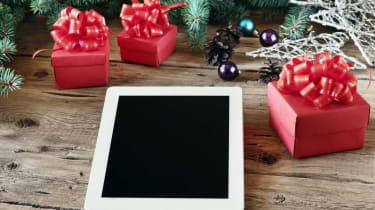 You'll find plenty of cool gadgets on store shelves this holiday season from wearables to aerial drones. Here are our picks for best tech gifts to help you stay connected, capture the moment and take to the sky:

Best Fitness Band. The Fitbit Charge HR ($150) packs a lot of features into a wristband. It tracks steps traveled, flights of stairs climbed, heart rate and sleep habits, and the small display shows your personal stats, identifies incoming calls to your cell phone and doubles as a watch.

Best Smart Watch. Limited battery life is an issue with the Apple Watch. But if you're an iPhone user, the Sport (starting at $349) brings Apple Pay, iMessage and, of course, Siri to your wrist. Among competitors, our favorite is the LG Watch Urbane ($350). It's compatible with Android and Apple phones, can run up to two days between charges, and receives calls, texts and e-mails. You can stay connected even when you’re away from your phone because the watch uses Wi-Fi to connect to your phone remotely.

Best Instant Camera. The iconic 20th-century camera is making a comeback, updated for the 21st century. The Polaroid Z2300 Instant Digital Camera ($180) captures 10-megapixel photos, has a 3-inch LCD display, supports up to 32GB of storage and spits out 2-by-3-inch prints in under a minute.

Best Aerial Drone. For the photography enthusiast looking to expand his horizons, consider the Parrot AR.Drone 2.0 Quadcopter Elite ($300), which has a high-definition camera for aerial photos and video. The DJI Phantom 3 Advanced (about $1,000 online) captures professional-quality video and photos.

Smart Phones: The newest Moto G (Android) is just $180 for the 8GB version. If you buy it unlocked from Motorola, you can use the phone with any of several carriers.