Wireless communications are poised for a big expansion in coming years as Uncle Sam boosts the range of available radio frequencies and as cities and rural communities extend low-cost broadband connections to many more areas. Moreover, airlines are on the cusp of offering wider Wi-Fi service to air travelers.

New frequencies freed up by the Federal Communications Commission (FCC) will unclog congestion on current Wi-Fi networks as well as eliminate many frustrating dead zones.

They’ll make a host of new applications practical. Wilmington, N.C., for example, is using an experimental network employing spectrum below 1 gigahertz (GHz)—the type being opened up by the FCC—in a number of “smart city” applications. They include supplying low-cost broadband connections to low-income housing, linking remote cameras on hurricane evacuation routes, monitoring water levels and water purity sensors, flood control and monitoring operations at city facilities, such as lights in public parks.

Using the same low spectrum, Plumas-Sierra Rural Electric Cooperative, which serves Plumas County, Calif., is teamed up with technology giant Google Inc. in a large-scale smart grid experiment that allows the utility to manage the electrical system remotely, obtain data from its substations, manage the power flow and better protect the system and its maintenance workers.

And software behemoth Microsoft Corp. is using low spectrum to link more than 100 buildings on its campus in Bellevue, Wash.

Spectrum below 1 GHz can cover much larger areas than is possible with today’s Wi-Fi hot spots, which operate in the 2.4 GHz and 5 GHz bands. The lower spectrum—also known as “white space”—can penetrate walls more effectively than higher gigahertz, in effect creating super Wi-Fi sites. They’ll help to make the use of Wi-Fi ubiquitous in workplaces and public spaces. 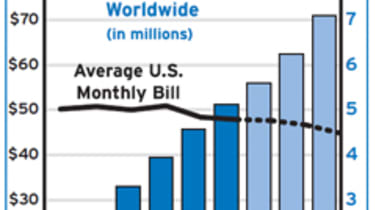 White space refers to radio frequencies between broadcast TV channels and is designed to reduce interference between radio or TV channels. Since television switched over to digital format—in effect allowing more channels in less of the spectrum—the amount of the space has increased, making it available for other uses.

The new spectrum will greatly increase wireless broadband systems and provide a greater range of coverage—by a factor of nine—or provide the same range at less power, paving the way for mobile communications devices with much greater battery life.

It will be a boon to rural areas that are currently underserved by wireless communications. It will also lead to the availability of relatively inexpensive mobile devices that will make exclusive use of the new space. Handsets designed for the new spectrum will hit stores next year.

Though the tech industry overall supports the FCC’s move to free up the low spectrum, some broadcasters fret that it may interfere with their operations. For example, wireless microphones used in broadcasting currently operate on low spectrum frequencies, but the new regulations from the FCC limit them to two channels.