Where Clinton and Trump Stand on Defense Spending

Neither candidate plans on cutting defense spending, but they plan on sustaining spending in different ways. 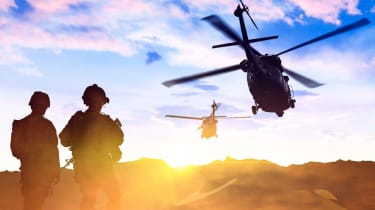 Key differences: Neither candidate seems to want to cut current levels of defense spending, but Clinton is focused on reallocating priorities and resources, while Trump hopes to make other countries pay more for maintaining worldwide alliances.

Key Clinton quote: “I think we are overdue for a very thorough debate in our country about what we need, and how we are going to pay for it.”

Key Trump quote: “We will completely rebuild our depleted military, and the countries that we protect, at a massive cost to us, will be asked to pay their fair share.”

The Democratic nominee has no official position on the defense budget, but she has called for a commission to investigate military spending. Given her more hawkish reputation relative to President Barack Obama, and goals such as maintaining a robust presence in the Middle East, building a cutting-edge military and defeating ISIS, experts believe that Clinton would likely maintain current defense spending levels. She would also use the defense budget to tackle related national security issues, including cybersecurity and fighting infectious diseases.

Trump hasn’t explicitly stated how much he would spend on defense, either, but he has laid out a goal of making the military so strong that “nobody’s going to mess with us.” He thinks the current budget could be used more efficiently. One of Trump’s ideas for curbing defense spending is making America’s allies pay for common defense. This would force countries such as Germany, Japan and South Korea to pay a higher price for U.S. military support.

While Trump and Clinton detailed their foreign policy plans in their convention speeches, neither mentioned plans for the defense budget.

From laptops to loudspeakers to, yes, shoes. Check out the latest gee-whiz gadgets to make an impression during gift-giving season.
Which Debt Is ‘Good Debt’ and Which Is ‘Bad Debt’?

Not all debts are created equal. Some help you get ahead. Others should be avoided at all costs. Here’s how to tell the difference and how to handle y…
19 Best Costco Kirkland Signature Products to Buy for the Holidays