Traveling alone doesn't have to be a lonely experience. 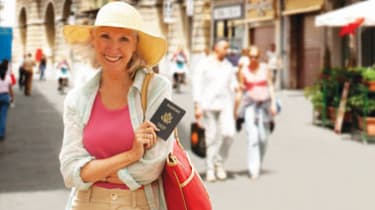 Kembell Huyke, 74, of Flushing, N.Y., retired as a banker 11 years ago—and now he’s seeing the world. He loves to travel, sometimes with his partner, and sometimes on his own. In the past decade, he has booked a single passage on ten journeys with ElderTreks, a group adventure-travel company for people 50 and older. Among his destinations: Ethiopia, India, Iran, Myanmar, Thailand and Tunisia. “Every trip is a life-enhancing, learning experience,” Huyke says. “Best of all, by the end of every solo trip, I’ve made at least one new friend.”

Huyke is a part of a growing demographic in the travel industry: tourists 55 and older who travel without a spouse or friend, often on group tours or cruises. And many older travelers are truly going it solo—designing itineraries that take them where they want to go without the restrictions of a tour group.

Those choosing to travel unaccompanied are best served by using a travel agent to arrange their trip. “If you need advice on how to get from Point A to Point B, you can call us for help anytime,” says Nathan Warner, a travel agent at Liberty Travel in Dulles, Va.

Beth Jenkins, an agent with McCabe World Travel, in McLean, Va., says that a knowledgeable agent will customize a trip with safety in mind and has contacts for guides and drivers all over the world. The agent also can arrange for a solo traveler to join a group excursion, or even a cooking class, for a day.

However you design your single travel, “when you travel alone, you meet new people,” says Cynthia Schoeppel, 64, of Alexandria, Va., who is divorced. She prefers the security and convenience of group tours, and she has taken ten solo trips in the past decade, including three with educational travel company Road Scholar. Often she selects trips with a home base in a major foreign city—such as Madrid, Rome and Florence—where she is comfortable as part of the group or walking on her own.

Typically, Schoeppel has found there are about six singles out of 25 to 35 people on each Road Scholar trip. “People are friendly,” she says. “All day, you’re busy.” She often goes out in small groups of both singles and couples. In Tuscany, for example, she joined a few people after dinner to sit in a café in a city square.

Tour operator Abercrombie & Kent reports a 19% increase in solo travel in 2013, with most travelers 55 and older. Forty percent of the tour operator’s solo passengers are married, but their partners may not share their interest or they have a scheduling conflict. Many in the married group are pursuing a personal passion such as wildlife photography or history. African safaris are the company’s most popular destination for singles. Small-group travel is a “natural fit” for solo travelers, says Jean Fawcett, media relations manager for Abercrombie and Kent, “giving guests the experience of exploring a destination with other like-minded travelers.”

Women far outnumber men as solo travelers: about 70% versus 30%, say tour operators, who theorize that women over 55 are more adventurous and active than their male peers, and often outlive their partners. JoAnn Bell, vice-president of programs for Road Scholar, says many of the organization’s single travelers are recent widows and widowers, embarking for the first time alone.

Ward Luthi, founder of Walking the World, an adventure-travel company for older explorers, says his tours, typically 10 to 16 people and two guides, lend themselves to solo travel because the group stays together all day. Singles don’t have to fear a later-in-life version of being shunned in the high school cafeteria, he says. Most meals are eaten as a group, or the guides invite the group’s members to eat with them.

If you’re looking for a cruise that caters to the older crowd, look for the higher-end cruise lines that offer smaller ships, such as Oceania, Azamara and Silversea. Carolyn Spencer Brown, editor-in-chief of Cruise Critic, which provides information and reviews, says Oceania and Azamara “don’t cater specifically to the family market.” Also, she says, Silversea often eliminates or reduces the single supplement. “And river cruises are great because the small ship size encourages group camaraderie,” she says.

Some larger companies, such as Norwegian Cruise Lines, are going after the singles market by offering solo cabins grouped around a lounge area, which makes it easier for singles of all ages to meet each other. Brown recently went on a Norwegian cruise, and she says there were a fair number of passengers over age 50 in the singles cabins.

If you’re traveling with a group, book early because the demand for single accommodations, especially on cruises, often outstrips the supply. And before you sign up, ask the tour operator how many other singles are going, says Gary Murtagh, president of ElderTreks. “We have a mix of couples and singles, and everyone gets to know each other,” he says. Between the daily activities and group meals, “90% of the time you won’t be alone,” he says.

In some cases, you may be able to get in touch with other solo travelers on your tour before you depart. Cruise Critic offers an online forum called Roll Call where you can chat in advance with other passengers.

You’re likely to find common ground with other group members if you choose a destination based on your interest and preferred activity level. If you’re an avid walker, for example, you’ll probably bond with others on a Walking the World trip in September on the Pilgrimage Walk to Santiago de Compostela, Spain. Daily activities include walking four to six hours a day, for 5 to 15 miles over varied terrain, including steep and rocky sections.

If you’re truly adventurous, you can travel without a group or companion. “You can do what you want, when you want. You’re not dragging anyone along, or being dragged along,” says Janice Waugh, 57, of Toronto, Canada. Waugh has taken about 35 trips alone since her husband died eight years ago, to destinations including Chile, China, Cuba and India.

On a solo trip, Waugh says, “you can rediscover your own rhythm.” This can be especially liberating for women over 50, who have spent a lifetime raising children, being responsible for their parents and working at a career, she says. Waugh, an introvert who was married to an extrovert, found that on her own she was especially good at connecting with people and making new friends.

Waugh is so committed to solo travel that she wrote a book, The Solo Traveler’s Handbook 2nd Edition (Full Flight Press, $17). She also writes a blog, Solo Traveler, which provides advice and resources on such topics as safety and destinations.

Her tips for meeting other people include staying at bed-and-breakfasts and hostels, where people are friendly and travelers share breakfast at communal tables. Waugh recommends using the free Global Greeter Network (www.globalgreeternetwork.com), sponsored by many cities worldwide, which provides companions to show visitors around local sights. Waugh cycled around Chicago with a greeter, and she and a greeter who spoke English walked around a section of Paris.

Security is a key concern for travelers, especially for women who are touring alone. Debra Asberry, president of Women Traveling Together, in Annapolis, Md., which takes 800 clients a year on 50 different tours, says unaccompanied travelers should check the U.S. State Department Web site and local tourism agencies to make sure there are no security warnings for the areas you plan to visit.

Women in particular should vet their hotels by checking TripAdvisor and other Web sites for comments about how safe it is to walk around the neighborhood at night, Asberry says. Unaccompanied women also should make lunch their main meal and eat dinner at or near the hotel. In some destinations, a woman eating alone at night may become a target for theft. At lunchtime, a woman eating alone appears to be on her lunch break.