Have You Been Duped?

Dating singles, consumers and retirement savers alike can see how not to get taken by learning from one woman's mistakes, detailed in the book "Duped: Double Lives, False Identities, and the Con Man I Almost Married." 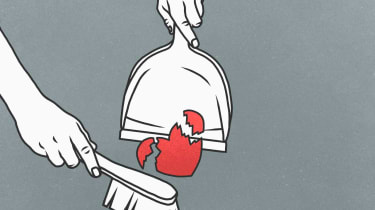 At one time or another we have all wondered if the person we are speaking with is on the level. Some of us are good at spotting fakes and cons, while others get scammed repeatedly — financially, emotionally, in life and love.

Being scammed or the victim of misrepresentation is a catalyst that brings people in to see a lawyer. After many years in law practice, many attorneys and paralegals tend to become skeptical — of everything. In that respect, I plead guilty.

So, when a new client tells us what problem happened to bring him to our office, so often my paralegals and I can see the danger signs flashing brightly — signs that our client just didn’t see or didn’t want to see.

Why? Is there a way to reduce the possibility of it happening again? And, when faced with stories or explanations for behavior that we just know on a gut level can’t be so, why do some people still persist in believing them?

You know someone like this, right? We all do.

New York journalist Abby Ellin asked herself those same questions after discovering the man she had been engaged to was a con, spinning exciting tales of danger and mystery, spanning the globe, where he always saved the day.

She turned this experience into a virtual handbook on how not to get taken. Duped: Double Lives, False Identities, and the Con Man I Almost Married takes readers through the emotional highs and lows Ellin went through. She holds nothing back.

I had the pleasure of speaking with her recently, finding the same degree of honesty and openness during our conversation as she revealed in the book.

In March 2012, Ellin discovered the truth about the Navy doctor she had been engaged to. Meeting “The Commander” in 2006, she was swept off her feet by this somewhat nerdy, inhaler-obsessed, 58-year-old guy suffering from numerous health issues. The stories he told made himself appear to be a real-life character out of a spy movie.

“The stories were so ludicrous they had to be true,” she says. “After all, someone has to do these sorts of things, right? Isn’t that what we’ve learned from Homeland and Zero Dark Thirty?”

One of the key points she makes in the book is that “Nothing was verifiable. It’s not like I could call up Human Resources at the CIA and ask if he was an employee,” she says. “When you can’t verify what you’ve been told, that’s a huge warning signal.”

“I didn’t want to doubt him,” she continues. “I was trying to throw my natural skepticism aside and be a person in a relationship and not a journalist in need of answers,” she says. “I wanted this relationship to work. I wanted to believe in him. But how can you have that if you doubt the things the person you love is telling you?”

The other issue is that so many of the things he told her were true. He really was a doctor in the Navy and did work at the Pentagon. He just wasn’t a war hero who took off for secret missions at a moment’s notice.

“I have no idea what he was really up to when he was supposedly off saving the world,” she says.

‘Sucker’ Tattooed on a Friend’s Forehead? Give them ‘Duped’!

Duped is a tremendous gift to people who have been harmed by feeling a duty to trust and believe. If you want to do something for a friend who has the word "sucker" tattooed on their forehead — and no matter what you say, they just won’t listen — get them Ellin’s book.

A theme in Duped is that a healthy dose of doubt is the safest course to follow until you can verify what you’ve been told. She learned this the hard way after growing suspicious of The Commander’s claims of having once treated Osama bin Laden and later learning his gift of pearls, which he claimed were expensive Mikimotos, were actually fakes.

In 2012, the Naval Criminal Investigative Service (NCIS) told her that The Commander had illegally prescribed Vicodin and other drugs, forging her name and his family’s names, along with people he worked with at the Pentagon.

She later discovered on her own that he had been married not once but twice before her, and that he was actually engaged to another woman while he was engaged to Ellin. He had never been a Navy SEAL, nor had he worked for the CIA.

He wound up serving 21 months in prison.

Duped takes readers through a history of cons, crooks, spies and morally challenged people from all walks of life. While the entire book is a compelling read — I went through it in a couple of days — it gets especially useful from page 144 onward, when the author discusses the idea of trust and why it’s so potentially dangerous.

That’s right. “Too much trust too early is often a trap,” Ellin says.

So, what are the most critical warning signs of deception to look for in any relationship, personal or business? How does someone get duped?

“If you are asked for money in a dating relationship — especially a large sum of money — run!” she says. “Next, if that person has endless stories about his heroic adventures, if he’s always off saving lives but you can never find any news stories about the event, then they probably never happened. Or else they happened on TV.”

“Your instincts are usually right on,” she says. “But too often we swat those nagging voice inside us away — we don’t want to see things as they really are, because it’s too painful. If something seems too good to be true, it probably is.”

You can order Duped here or at your local bookstore. For more information on the author go to www.abbyellin.com.

Tax breaks aren't just for the rich. There are plenty of them that are only available to middle- and low-income Americans.
Check Your Financial Adviser Now (and Every Year) or Regret It Later