Bonding over books or bocce can spark important conversations and help stave off depression in retirement. 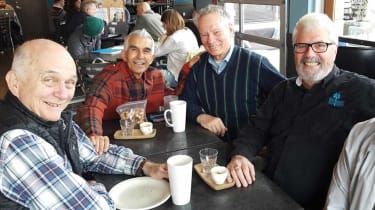 One morning every month, about a dozen older men gather to discuss a book they’ve read since their last meeting. The topics covered by the Tacoma Retired Men’s Book Club in Washington state are intense, ranging from morality to economics and existentialism to health care.

Ronald Boothe, 70, a retired psychology professor who formed the club in 2008, says the men learn about each other by drawing on their own “personal anecdotes and memories” as they analyze the books. Conversations may veer to health issues and retirement goals. “It turned out we had so much in common that we bonded socially and emotionally more than I ever anticipated,” Boothe says.

Before he retired, Boothe’s friends were his work colleagues. In contrast, the book club has led to a “fairly tight social group” of men who get together, often with their wives, for meals and outings.

Such support groups can be a godsend for retired men, who, research shows, face a larger risk than retired women of depression and even suicide. During their working years, women are more likely than men to pursue close-knit friendships and interests that help smooth the transition to retired life.

Michael “Buck” Bragg, 70, found a social network when he joined Men’s Wisdom Works several years after he moved with his wife to Asheville, N.C., in 2008. In 2006, he had taken early retirement as a vice president in the claims department at State Farm Insurance Co., in Bloomington, Ill. The group was started by a retiree whose goal was to help avert the isolation that many retired men feel. Today, 14 groups of about a dozen Asheville-area men meet for discussions twice a month.

The men discuss the loss of identity, relationships with family members, the importance of legacy and health. Bragg says a meeting starts with each member talking briefly about something meaningful that occurred in the previous two weeks. A member who perhaps mentions a dispute among siblings over caring for a parent, says Bragg, “may trigger a discussion about how to deal with aging parents and sharing care.”

Stephen Barone, 69, a retired education consultant and a member of a different Men’s Wisdom Works circle, says the sudden death of two members led to conversations about dying. The group discussed both practical issues, such as hiring health aides, and the “emotional part of realizing the end is more imminent than we thought.” Bragg and Barone say they socialize with some of the men in their groups.

Y’s Men of Westport/Weston, in Connecticut, takes a different approach. It offers a weekly speakers forum for its 400 members. Speakers include artists, legislators, historians, authors and medical experts. Members can join more than 20 activity clubs, such as bocce, chess, photography, classical music, tennis and community service.

Ed Bloch, 85, a retired public relations executive, co-chairs the speakers committee and is one of eight members of a Wednesday morning walking group. Afterwards, at lunch, he says, “we sit around and chat, and there’s a real feeling of fellowship.”

As a vice president of the organization, John Brandt, 74, who owned a public relations firm, says Y’s Men keeps him busy. Besides recruiting arts speakers, he, along with Bloch, helped design fundraising materials for the local ambulance service. “If you’re not working, a lot of the day is up for grabs,” Brandt says. “If you don’t use the time constructively, you’re worse for it.”

For Barone, the discussions with other professionally successful men on such topics as work status and aging made it easier for him to enjoy his retirement. “We’ve discussed how much achievement is enough,” he says. “It’s scary to say I have achieved enough—yet it is very liberating.” 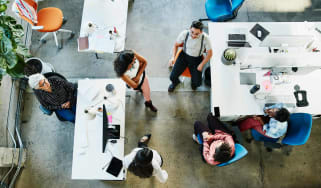 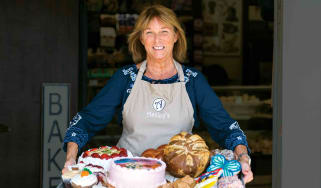