Why I Think Apple's Stock Is a Bargain

Though Apple is already largest holding in my portfolio, I'm sorely tempted to buy more. 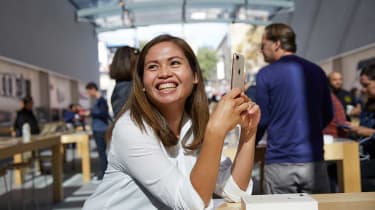 I first bought shares of Apple for the Practical Investing portfolio in late 2011, when the stock was reeling after the death of company cofounder Steve Jobs. I bought more shares two years later, when Wall Street solemnly declared that a quarterly earnings report definitively confirmed dire predictions about Apple’s future. I bought still more in January 2016, when the company telegraphed its first drop in annual sales. At that point, Mr. Market declared there was nowhere for Apple to go but down.

Apple (symbol AAPL, $154) is now the largest holding in the portfolio. I own 356 shares, which I purchased at an average price of $56.97 per share. And if it wasn’t for my commitment to diversification—Apple accounts for more than 15% of the portfolio—I would probably buy more today.

There are two reasons why I bought in the past and am tempted to buy now. One is purely mathematical. At each point in time, I believed that Apple stock was comparatively in­expensive. My simple formula for determining whether a stock is selling for a good price is to look at the stock’s forward price-earnings multiple (share price divided by projected year-ahead earnings) and compare that to its earnings growth rate and dividend yield. By and large, if the earnings growth rate added to the dividend yield, expressed as whole numbers, is more than the stock’s forward multiple, I consider the stock a good value.

Wall Street analysts, on average, expect Apple to earn $10.92 per share in its 2018 fiscal year, up about 21% from fiscal 2017, which ended September 30. Sales are also expected to jump nearly 16% on the back of new product offerings, including the iPhone 8, the iPhone X, and a new and more versatile Apple Watch. The company pays a $2.52 annual dividend, which gives the stock a 1.6% yield. Thus, earnings growth rate plus dividend yield equals 22.6. At today’s market price, the stock sells for just 15 times projected earnings—a relative bargain. (Prices and other data are as of September 29.)

The other reason I want to own Apple is its game-changing products, which I think will continue to fuel sales and earnings for years. Admittedly, Apple is more about execution than innovation. I had an MP3 player long before I got an iPod Mini, but my workout became far more joyful—and, thus, longer—when I could carry around an entire music library in something that weighed less than an ounce.

Years later, when my kids realized I couldn’t manage my BlackBerry without a technological consult, they persuaded me to buy an iPhone, which was intuitive even for the tech-challenged. A few upgrades later, I stopped lugging around my camera because the photos I took on my phone were better.

The bad old days. Speaking of which, remember when you used to pay extra for a GPS system in your car? Search the house for a working flashlight or buy a separate alarm clock, stopwatch or video camera? Who misses the days when you had to pick up a phone while simultaneously turning down the radio whenever a call came in? Other phones have similar features, but I believe the iPhone’s execution is unparalleled.

When I watched Tim Cook’s new-product video conference in September, I got a glimpse of the future: an Apple Watch under the Christmas tree. (Are you listening, honey?) Not only will this watch track workouts, it will also allow me to exercise while cordlessly listening to music and answering the rare, it-better-be-an-emergency-if-you’re-interrupting-my-run phone call. And my new watch will monitor my heart for hard-to-detect medical problems, such as arrhythmias.

Sure, Apple products are expensive. But given the number of costly gadgets replaced by my phone and my soon-to-be-purchased watch, I consider them a great value—just like the stock.

Kathy Kristof is a contributing editor and author of the book Investing 101. You can see her portfolio at kiplinger.com/links/practicalportfolio.