How IBM’s Watson Can Help Cut Your Tax Bill

For now, Watson doesn’t appear to be a big moneymaker for IBM. But investors seem impressed with its potential. 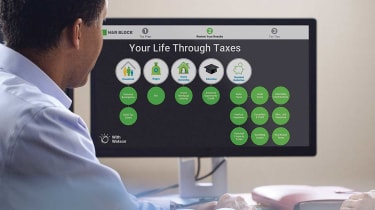 Computers have helped people wade through their tax returns for decades. Preparers at H&R Block this season will get some help, too. But a computer won’t just crunch the numbers. Rather, it will probe your return and ask questions along the way--trying to make sure you don’t pay a penny more than necessary to Uncle Sam. H&R Block has “hired” IBM’s Watson--a powerful artificial intelligence system--to act as a cyberguide in preparing taxes.

To study for the job, Watson digested the federal tax code (more than 74,000 pages) and absorbed thousands of conversations between H&R Block’s tax preparers and clients. Its objective is to analyze conversational patterns to determine whether taxpayers may be missing opportunities for savings. Now, when a tax preparer and client go through the paperwork, Watson can follow along, and the system will issue prompts on computer screens if it detects a potential deduction or credit they may be missing. “Watson will ask questions that we might not think about on our own,” says Ed Harbour, a vice president at IBM.

With H&R Block expecting Watson to assist with processing 11 million returns this year, the system should get smarter as it absorbs more data and conversational patterns, making it a more useful tool, says Harbour. For example, IBM says the system should eventually provide taxpayers with “increasingly personalized tips” to help lower their tax bills in the future.

Watson isn’t the only AI technology playing a greater role in our lives. If you use Facebook, Google or Amazon.com, for instance, AI is behind the scenes, guiding you through the site. Meanwhile, Watson is expanding into scientific research, robotics and other fields, and IBM hopes it will push to the forefront of several major technology trends, such as the Internet of Things, cloud computing and personalized medicine. (For more companies cashing in on these trends, see 13 Stocks for the Tech Revolution.)

For now, Watson doesn’t appear to be a big moneymaker for IBM. But investors seem impressed with its potential, seeing it as a way for IBM to reverse a long period of falling sales and profits. IBM’s stock (symbol IBM) returned 25% in 2016, after three straight years of declines. One shareholder who should be pleased: Warren Buffett, whose Berkshire Hathaway owns an 8.5% stake in Big Blue, worth $14.2 billion.

The stock market will take a pause on Thanksgiving, but investors will need to pay attention for a few hours on Black Friday.
14 Hot Upcoming IPOs to Watch For in 2020 and 2021