Gross says that stocks "stink." But over the long-term, they'll prove to be the best investment.

Bill Gross, manager of the world’s largest mutual fund, touched off a heated reaction recently when he wrote that “the cult of equity is dying.” Most of the responses to his essay seemed to focus on his extremely negative view of the stock market. That was nothing new for Gross, whose enormously successful firm, Pimco, specializes in bonds. In a September 2002 newsletter piece titled “Dow 5,000,” Gross wrote, “My message is as follows: Stocks stink and will continue to do so, until they’re priced appropriately, probably somewhere around Dow 5,000, S&P 650, or Nasdaq God knows where.”

It was a terrible call. The Dow Jones industrial average never got close to 5,000 and is now over 13,000. Let’s stipulate that Gross knows—and loves—bonds better than stocks. That’s how he made his fortune. But let’s also not caricature the guy. He is making a serious point that revolves around the word cult. He believes that “cult followers”—that is, most investors—have embraced stocks to a degree that defies logic. Is he right? I’ll get to the answer a bit later. But first, understand that he’s clearly onto something with his contention that “the cult of equity is dying,” in the sense that investors are no longer as enamored of stocks as they were before the calamity of 2008.

Total assets in stock mutual funds dropped from $6.4 trillion at the end of 2007 to $5.6 trillion as of June 2012, according to the Investment Company Institute, the fund industry’s trade group. Over the same period, assets in bond funds jumped from $1.7 trillion to $3.2 trillion. For the first six months of 2012, investors pulled $30 billion out of stock funds and added $125 billion to bond funds. 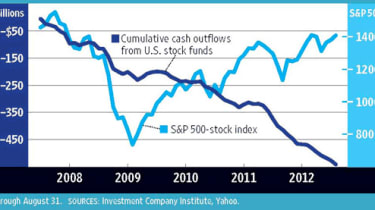 The decline in stock investing is all the more remarkable because the Dow industrials have almost precisely doubled since the market hit bottom in March 2009. Investors are shoveling money into bond funds even though the S&P 500 is up 16% for the year and the yield on the ten-year Treasury bond is near a record low at 1.7%.

Investors have watched the train leave the station because they’re scared to death. A survey by the ICI found that the proportion of mutual fund investors who said they were either “unwilling to take any risk” or willing to take only “below-average risk for below-average gain” rose from 14% in 2008 to 23% in 2011. In 2000, 51% of Americans in their fifties had 80% or more of their 401(k) retirement assets invested in stocks; by 2010, the proportion with 80% or more in stocks had dropped to 26%.

The reasons are obvious. The first is the S&P 500’s 37% drop in 2008, the stock market’s worst calendar-year decline since 1931. Then you have the “flash crash” of 2010, when the Dow lost 600 points in a few minutes; the Bernie Madoff scandal; the Facebook IPO debacle; and the overall economic malaise. Many investors just want the stock market to go away.

But surveys and clever explanations aren’t necessary. All you need to know is that Pimco Total Return (symbol PTTDX), a medium-maturity bond port-folio that Gross manages, is by far the biggest mutual fund in the known universe, with $272.5 billion in assets. By contrast, the former champ, Vanguard 500 Index (VFINX), which tracks the S&P 500, holds $116 billion in assets.

If stocks ever had a cult following, it is no longer so. The thrust of Gross’s August newsletter is that it’s a good thing investors are cooling to stocks because stock returns are built on a fraud and an illusion. They have no right to have done as well as they have, he says, and they’re falling back to earth, where they belong.

Over the past 200 years, as Jeremy Siegel, the Wharton finance professor (and Kiplinger’s columnist), has shown, stocks have returned about 10% annualized. Gross, however, prefers to look at the stock market’s after-inflation return of 6.6% annualized. He argues that because gross domestic product “and wealth grew at 3.5% per year [in real terms], it seems only reasonable that the bondholder should have gotten a little bit less and the stockholder something more than that.” But, Gross says, not three percentage points more!

In his 2002 piece, Gross wrote, “Come on, stockholders of America, are you naïve, stupid, masochistic, or, better yet, in this for the ‘long run’?” Those last two words are a reference to the title of Siegel’s influential book, Stocks for the Long Run, which argued that stocks have not only earned much more than bonds over the years, they have done so with little more risk than bonds—thus making stocks superb investments.

There is no disputing the excellent performance of stocks. But Gross is suggesting that investors have participated in a Ponzi scheme, that returns have been higher than economic growth has justified and are unlikely to continue in the future. His main argument is that if an economy grows at 3.5% a year, as ours has for the past century or so (not including inflation), then stock returns, which in theory reflect the value of businesses, should also grow by roughly that rate. Instead, he notes, returns have exceeded economic growth by 3.1 percentage points per year.

But Gross’s critics, including Siegel himself, say that the bond wizard’s analysis is wrong and that long-term after-inflation returns in the area of 6.6% per year are reasonable.

I agree with them. Here’s why: Stock returns reflect two elements, economic growth plus dividend payments, just as the return on a rental property would reflect the rising value of the house plus rental payments. (In the case of a stock, companies sometimes forgo paying dividends to shareholders and reinvest profits to promote future growth.) Not only that, but, as Gross himself notes, stock investors are also supposed to get paid for taking a risk. This extra payment is called the equity risk premium, and the irony is that in times such as these, when fear runs high, the risk premium rises—and investors get higher, not lower, returns to compensate them.

One way to determine the level of fear in the market is to compare the returns of stocks to the returns of a presumably risk-free asset, such as a Treasury bond. This comparison is often called the Fed model because the Federal Reserve hinted 15 years ago that it followed the formula. The price-earnings ratio today for the S&P 500 is 13, based on forecasts of profits for the year ahead. If we invert the P/E, we get something known as the earnings yield. This figure is, essentially, the yield investors would receive if all the profits earned by S&P 500 companies were distributed to shareholders as dividends.

So if the P/E is currently 13, then the E/P, or earnings yield, is 7.4%. Compare that with a current return of just 1.7% for the ten-year Treasury, and it means that investors are getting paid an extra six percentage points to take on the risk of owning a stock rather than government debt. That sounds like a good deal to me.

I see a lot of firms with a good shot at increasing their earnings faster than the economy’s 3.5% growth rate or the stock market’s 6.6% annualized return after inflation that appear to be bargains in a time of fear. And many pay good dividends, too.

The Dow Jones industrial average is the mother lode of superb companies. Here are five favorite components (prices are as of September 7): International Business Machines (IBM), which, at $200, trades at 12 times estimated year-ahead earnings and is expected to increase its free cash flow by one-third over the next two years (see Opening Shot); Cisco Systems (CSCO), the giant maker of networking equipment, which sells for 9 times projected earnings and recently raised its quarterly dividend from 6 cents to 14 cents a share (the stock, at $20, yields 2.9%); drug maker Merck (MRK), which, at $44, has a P/E of 12 and a yield of 3.8%, more than twice that of the ten-year T-bond; Microsoft (MSFT), which, at $31, sells for 9 times year-ahead profit estimates and yields 2.6%; and insurer Travelers (TRV), which, at $65, trades at 9 times earnings and yields 2.8%. Or just buy SPDR Dow Jones Industrial Average ETF (DIA), an exchange-traded fund that tracks the Dow.

There’s a lot of fear out there, and it’s a good bet that all that worrying is depressing stock prices. In the short term, that fear may actually be justified. But, in the longer term, stock prices move jerkily but inexorably higher. And that’s history, not a cult, speaking.

James K. Glassman is executive director of the Bush Institute, which just published a new book on the U.S. economy, The 4% Solution. He owns none of the stocks mentioned.

Kiplinger's Investing for Income will help you maximize your cash yield under any economic conditions. Subscribe now!