There's considerable risk in the debt of developing countries, but these options strive to minimize it by sticking with securities denominated in dollars. 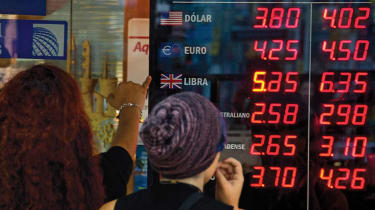 What they are. Emerging-markets debt is made up of IOUs issued by governments and companies in developing nations, such as China, Brazil and Russia. The asset class includes both bonds denominated in local currencies and debt issued in greenbacks.

What caused the downturn. The strengthening dollar has wreaked havoc on funds that invest in bonds denominated in local currencies. That’s because money invested in foreign currencies gets translated into fewer dollars when the buck rises. With the Federal Reserve raising interest rates while much of the rest of the world is cutting rates, the dollar is likely to keep strengthening (the Fed was expected to hike rates in mid December). In addition, although bond prices typically fall when yields rise, the prospect of higher interest rates in the U.S. could reduce the relative attractiveness of less-secure emerging-markets debt. Finally, plunging oil prices have hurt oil-dependent emerging nations, such as Russia and Venezuela, making their debt riskier and causing their yields to rise and their prices to fall.

Why the bears may be wrong. Many emerging-markets currencies are already down 25% to 30% from year-ago levels, and that has wrung out much of the risk of further depreciation, says Penelope Foley, a bond fund manager at TCW. Moreover, although interest rates here may rise a touch over the next year, the nearly 6% current yield on emerging-markets debt will remain attractive relative to what U.S. bonds pay. And while the default risk has increased in some nations, it has decreased in others, such as Mexico, where reforms are making the countries more creditworthy.

What to buy. All of our picks have little to no exposure to foreign currencies. One of the safer choices in this dicey category is Fidelity New Markets Income (symbol FNMIX), a member of the Kiplinger 25. Although the fund has nearly half of its money in debt with below-investment-grade credit ratings, virtually all of its assets are in dollar-based bonds. That has helped performance over the past year, during which New Markets Income lost just 0.6%. John Carlson has been at the helm since 1995, making him one of the longest-tenured emerging-markets bond fund managers. The fund, which charges annual fees of 0.84% (below average for the category), yields 6.0%.

A fund with a similar profile is T. Rowe Price Emerging Markets Bond (PREMX). Its manager, Michael Conelius, has been in charge since late 1994, and he has most of the fund’s assets in dollar-denominated debt. About half of the fund’s assets are in junk-rated or unrated bonds. Annual expenses are 0.93%, and the fund yields 5.2%. Like its Fidelity counterpart, the Price fund lost 0.6% over the past year.

Unlike the others, which invest mostly in government IOUs, DoubleLine Emerging Markets Fixed Income (DLENX) focuses on corporate emerging-markets bonds, with debt from Peru, Chile, Mexico and Colombia accounting for some 60% of its assets. Although the fund can invest in local currencies, it has all of its assets in dollar-denominated bonds today. The fund, which yields 5.5%, lost 4.6% over the past year. Annual fees of 1.15% are average.

If you prefer an exchange-traded fund, consider iShares J.P. Morgan USD Emerging Markets Bond (EMB). As the name suggests, the fund, a member of the Kiplinger ETF 20, invests exclusively in dollar-denominated bonds. Annual fees are 0.40%, and the fund yields 5.2%. Over the past year, it lost 0.4%.