If you make a lot of money and live in a high-tax state, municipal bonds can be magic. 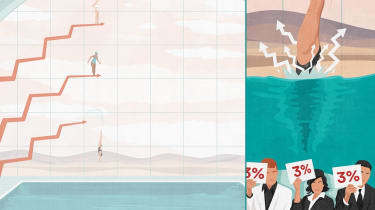 Issued by state and local governments, municipal bonds yield an average of just 2.5%. But you won’t owe a penny in federal tax on most types of muni-bond income, and you can get a break on state taxes, too, if you invest in munis issued in the state where you reside. For instance, if you live in a state with a stiff income tax, such as California, and are in the top combined federal and state bracket of 50.9%, a tax-free yield of 2.5% would be equivalent to a 5.1% yield from a taxable bond—close to the yield of many low-quality corporate bonds.

Granted, the muni market has experienced some turmoil lately because of concerns that Congress will cut federal income tax rates, eroding the value of the tax-exempt status of muni interest. But changes in tax rates have historically had minimal impact on muni prices, says Christopher Ryon, a bond fund manager with Thornburg Investment Management. “It’s a red herring,” he says. “Tax changes are going to take a long time to work through the legislative process, and I don’t think they’ll be a major driver of the muni market.”

Risks to your money. Munis could slide if states or local governments run into financial trouble (for instance, some bonds issued by Illinois, a state that has long outspent its revenues, trade at 87 cents on the dollar). Muni bonds can be sensitive to changes in interest rates, especially if they mature far in the future—say, 15 or 20 years from now. Many muni funds hold loads of long-term bonds, which could prove disastrous if rates keep rising. Consider, for example, Nuveen All-American Municipal Bond Fund (symbol FACCX). Its share price would likely drop by more than 8% if long-term rates were to increase by one percentage point.

How to invest. To maximize tax savings, find a muni mutual fund that will trim both federal and state taxes. For now, it’s prudent to stick with short- or intermediate-term funds, forgoing some income in exchange for a buffer against rising rates. A good choice for Californians is Fidelity California Limited Term Tax-Free (FCSTX, yield 1.1%). For New Yorkers, USAA New York Bond (USNYX, 2.0%) looks like a solid bet. Neither fund takes excessive interest-rate risk, keeping its duration (a measure of sensitivity to rates) relatively low. In the national muni-bond realm, we like Fidelity Municipal Income 2019 (FMCFX, 1.1%), which will liquidate shortly after June 30, 2019. Its average duration is 2.1 years, suggesting that its price would decline by roughly 2% if rates were to rise by one percentage point.

Aiming for higher returns? Take a flier on SPDR Nuveen S&P High Yield Municipal Bond ETF (HYMB, price $57, 4.7%), an exchange-traded fund that holds bonds issued by municipalities with below-average credit ratings. On a taxable-equivalent basis, the fund yields 8.3% for investors in the top federal tax bracket of 43.4% (which includes a 3.8% surcharge on investment income). That’s on par with the average yield of taxable “junk” bonds, which are generally riskier than muni bonds. The fund’s duration of 7.8 years looks high, but the steep after-tax yields of bonds in the portfolio should help cushion against losses due to rising rates. The fund’s holdings could also slide if issuers default on their obligations or are downgraded by credit-rating agencies.

Bonds can be more complex than stocks, but it's not hard to become a knowledgeable fixed-income investor.
Insurance for Long-Term Care at Home

From reading materials to debt, the demands on your savings during your golden years might surprise you.
Skip to ContentSkip to Footer