Hedge fund managers, venture capitalists and others share their best investing ideas at the Sohn conference. 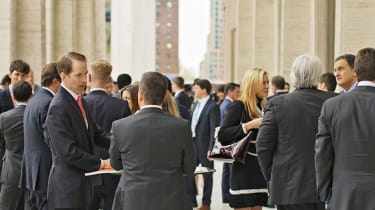 The market’s surge over the past few months has lifted all sorts of stocks. But plenty of stocks remain misunderstood by the market, looking undervalued or, in some cases, grossly overpriced.

That was one of the takeaways from the Sohn Investment Conference, an annual event held in New York City to raise money for pediatric cancer care and research. Hedge fund managers, venture capitalists and other big investors took the stage at Lincoln Center on May 8 to present some of their best ideas, offering tips on what to buy and what to sell short (a technique for profiting off falling share prices).

Some of these ideas may be too esoteric, or risky, for most investors. One fund manager pitched the idea of profiting off non-performing Italian loans by buying shares in Italian bank UniCredit. He also suggested betting against bonds issued by the British government (which he doesn’t think will do well in the aftermath of Brexit). Hedge fund billionaire David Einhorn suggested shorting energy-services company Core Laboratories (symbol CLB, price $106.76). (Share prices are as of May 9.)

One of the more mainstream ideas we liked was the suggestion by Brad Gerstner, founder and CEO of Altimeter Capital Management, a Boston-based hedge fund, to buy airline stocks, specifically United Continental Holdings (UAL, $78.55). Airlines are benefitting from a wave of consolidation that has resulted in fewer carriers, packed planes and less pressure to trim ticket prices—all of it resulting in record industry profits.

United looks appealing, Gerstner said, notwithstanding the negative publicity surrounding its forcible removal of a passenger recently. The airline runs a high-quality fleet of planes and a route network oriented toward major travel hubs, such as New York City, Chicago, San Francisco and Los Angeles.

United’s profit margins are low, due partly to its costly merger with Continental. But merger-related expenses are fading, and the company has laid out plans to lift profit margins to the industry average by 2020. Assuming United follows through on those plans, and demand for air travel remains strong, Gerstner expects the stock to top $170 over the next three years.

Gerstner isn’t the only big investor who sees value in airlines. Warren Buffett has taken stakes worth more than $7 billion in American Airlines (AAL, $47.08), Delta Air Lines (DAL, $49.56), Southwest Airlines (LUV, $58.28) and United, according to the latest filings of Berkshire Hathaway (BRK.B, $163.46), the company he heads.

A stock with huge potential is Tesla (TSLA, $321.26), said Chamath Palihapitiya, head of Social Capital, a venture-capital firm. Tesla looks like Apple (AAPL, $153.99) did in 2007, when the company released its first-generation iPhone, he said. The phone revolutionized the mobile industry, spawned an ecosystem of products and services, and ushered in a waterfall of profits for Apple.

Tesla’s sales are tracking similarly to Apple’s in those early iPhone days, Palihapitiya said. The company plans to launch its first mass-market vehicle this year, the Model 3, and could eventually capture 5% of global car sales, surpassing BMW (BMWYY, $32.38) and other makers of luxury autos. Tesla should also be more profitable than traditional car makers because its manufacturing costs aren’t as high, it controls its own distribution, and its vehicles are packed with high-margin software and technology, such as its Autopilot feature.

Moreover, Tesla isn’t just a car company. It also runs a solar-panel business (Solar City) and the giant “Gigafactory,” which makes lithium-ion battery cells for use in Tesla’s energy-storage products and cars.

Palihapitiya estimates that Tesla’s car business alone could be worth $337 billion in a decade—more than six times the company’s current market value of $52 billion. Throw in the battery business, solar panels and whatever else Tesla CEO Elon Musk can cook up, and the stock could be 10 times higher a decade from now, he said.

Tesla won’t be a moonshot, though. The company is still burning through cash and will have to deploy huge amounts of capital to fund its expansion plans, possibly up to $40 billion, Palihapitiya said. Some of that money may come from issuing more shares, which could result in shareholder dilution and drag down the stock’s price.

Buying the stock would get you a piece of Tesla’s enormous growth potential. But Palihapitiya prefers Tesla’s convertible bonds—a fixed income security that can be converted into a fixed number of shares. The convertibles aren’t widely available to the public, though.

If you’re looking for dividends, consider CenturyLink (CTL, $25.03). The stock yields 8.6%, making it the highest-paying stock in Standard & Poor’s 500-stock index. CenturyLink provides landline and other telecom services to businesses and consumers. The business has sagged as customers have dropped their landline phones.

But CenturyLink is expanding into broadband internet and other more profitable services, and it will get much bigger this year, when a pending merger with Level 3 Communications is scheduled to close. The combined company will be a powerhouse in business-oriented telecom services, said Keith Meister, head of hedge fund Corvex Management. The deal will be “game changing,” he said, shoring up CenturyLink’s sales and profits and helping to preserve its dividend for the long run. Meister sees the stock climbing to $34 within a few years, delivering cumulative gains of more than 40%, including dividends.

One other idea that caught our attention was to invest in emerging-markets stocks, a recommendation pitched by Jeffery Gundlach, comanager of Doubleline Total Return Bond Fund (DLTNX), a member of the Kiplinger 25, the lineup of our favorite no-load mutual funds.

Developing-market stocks have lagged far behind U.S. stocks for the past decade. Over that period through May 8, iShares MSCI Emerging Markets ETF (EEM, $40.69), an exchange-traded fund that tracks a leading index of developing-markets stocks, returned a cumulative 17.9%, compared with 97.4% for the S&P 500. But the ETF has started sprinting ahead: it gained 24.8% over the past year, compared with 19.1% for the S&P 500.

Gundlach thinks that trend will continue, in part because emerging-markets stocks look much cheaper than U.S. shares. (He also suggested shorting the S&P 500, though we don’t advise that). Gundlach added that investors shouldn’t fear a stronger dollar, which would hurt returns for U.S.-based holders of foreign securities. Investors worry that the dollar will gain value as the Federal Reserve raises interest rates. But that didn’t happen the last three times the Fed embarked on a rate-hiking campaign, Gundlach said, and it shouldn’t this time around.