Tesla Takes Off. Should Investors Go Along for the Ride?

Investors are treating the maker of battery-operated cars like a dot-com. Ford and GM are better deals.

In reality, of course, you can invest in both. But it’s clear that investors view Tesla as a different breed of automaker. After two quarters of results that delighted investors, Tesla’s shares have risen fivefold this year and, at $160.70, trade at nearly 100 times estimated 2014 earnings (all prices are as of September 9). To invest in Tesla now, you have to buy into the idea that the Palo Alto, Cal., company will move from being a niche player in the luxury-car market to a “mass market” seller of revolutionary automobiles that will take a significant chunk of sales away from Ford Motor (F) and General Motors (GM), not to mention foreign automakers.

Indeed, the bright future forecast for Tesla may distract investors from a bright present for both Ford and GM, whose shares are available on much more reasonable terms.

The raves about Tesla’s Model S—with its sleek look and long-lasting battery—show that the company is doing something right. Consumer Reports placed the car at the top of its 2013 ratings, and both Motor Trend and Automobile magazines named the Model S car of the year. Tesla “is the only automaker that is displaying the inherent advantages that we’ve long believed that [electric cars] could have over internal combustion [engine] vehicles,” says analyst Dan Galves, of Deutsche Bank Securities.

Galves was more skeptical earlier in the year, when he said he believed that Tesla, “after all is said and done, is an auto company and will eventually be valued as one.” At the time, in mid May, he raised his price target from $35 to $50, even as the shares pushed up to $90. By late July, he had raised his recommendation to “buy” and raised his price target to $160, saying he had been “late” in recognizing that Wall Street would value Tesla based on what it could do many years in the future, and that he had been “overly focused on the risks.”

The stock’s remarkable ride suggests, however, that some may have dismissed the risks altogether. Analyst Brian Johnson, of Barclays Capital, says Tesla’s most passionate advocates are betting that the company will be a smashing success. “The bull argument for the stock could be that the CEO, Elon Musk, is the next Henry Ford—that is, mass-market success would be assured.” 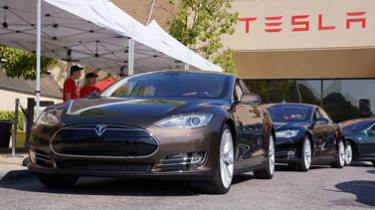 This year, Tesla expects to deliver 21,000 of its Model S autos, which sell for $71,700 to $126,470, before a $7,500 federal tax credit. Tesla’s next big test is whether it can produce, by around 2017, its Gen III model, a more affordable version that could sell for less than $50,000. That would require more strides in cutting the cost of the electric battery that powers Tesla autos. After that—say, in 2022, Johnson figures—might come an era of true mass-market production, with Tesla models selling for $25,000, on average.

“Our discussions with investors,” Johnson says, “suggest that Tesla bulls assume zero chance of failure, a 95% chance that Tesla successfully enters and competes in the mass market, and only a 5% chance that it only gets as far as Gen III.” If they’re right, he figures the shares are worth nearly $280 today. But he assigns much lower probabilities—only a 12% chance of mass-market success, for example—and comes up with a value of $141, which is below the stock’s current price.

Tesla’s market value is now $20 billion, compared with Ford at $68 billion and GM at $50 billion—despite both Ford and GM selling roughly ten times as many cars in August as Tesla will sell all year. Although Tesla’s stock is priced as if it’s the future of auto making and Ford and GM are its past, the outlook is actually bright for the old-line manufacturers.

Ford, which did not require the federal bailout that GM did, has long been regarded as the better operator, with larger profit margins and a more robust product line. At $17.31, the stock trades for 10 times estimated earnings for the next four quarters. Analyst Adam Jonas, of Morgan Stanley, says that if U.S. auto sales rebound to 18 million by 2015 (compared with this year’s pace of about 15 million), and Ford can continue to gain market share, the stock could reach $27 by mid 2014.

GM has had more problems, particularly its exposure to troubled European economies. At $36.48, its stock sells at 8 times estimated year-ahead earnings. Analyst Itay Michaeli, of Citigroup Global Markets, rates the stock a “buy” and has a one-year price target of $45. He says GM’s results are stabilizing, its pickup-truck sales look promising, and its OnStar service gives the company a technological advantage as more cars are equipped for Internet access.

Somewhat overlooked as a result of Tesla’s astonishing ascent is the recent performance of Ford and GM shares: They’re up 71% and 56%, respectively, over the past year. And yet the shares remain inexpensive for those interested in owning the giants of Detroit rather than the pricey upstart from Palo Alto.