Despite political posturing over high drug prices, the sector’s prospects remain bright, thanks to a steady stream of new products. 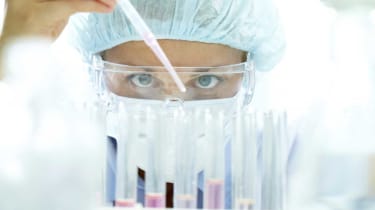 What goes up must come down, and when it comes to stocks, a big rise in a relatively short period of time often presages a nasty fall. Consider the meteoric rise in biotechnology stocks. From the start of 2015 through July 20, iShares Nasdaq Biotechnology ETF (symbol IBB), an exchange-traded fund that tracks the sector, soared 31%. Since March 2009, when the bull market began, the ETF returned 582%, or 35% annualized. But in less than three months since the July peak, the ETF has plunged by 22%.

Part of the decline coincided with the stock market’s May-August correction. But the sell-off intensified in September after Democratic presidential candidate Hillary Clinton sent a tweet that criticized Turing Pharmaceuticals for raising the cost of a drug that fights parasitic infections from $13.50 a tablet to $750—an increase of 5,456%—and vowed to fight “price gouging.” Dave Mazza, head of research for the SPDR ETFs at State Street Global Advisors, calls the market’s reaction “a taper-tantrum type moment,” alluding to a bond market sell-off in 2013.

With a presidential election less than 13 months away, Clinton and other candidates for the White House are likely to vigorously attack the pharmaceutical industry. “Every politician needs a villain, and big pharma and biotech are easy targets,” says Stacie Cowell, comanager of the Rainier Mid Cap Equity Fund and Rainier Small/Mid Cap Equity Fund. The good news is that over the long term, biotech companies should continue to develop innovative cures for a wide variety of illnesses, many of them likely to generate billions of dollars in revenues annually. That bodes well for biotech stocks, at least over the long haul. And with share prices well off their highs, investors have a chance to buy into biotech at more-palatable prices.

Consider Alexion Pharmaceuticals (ALXN, $159.86), whose stock has dropped 23% since hitting a record high in July. Alexion makes Soliris, which treats the rare blood disorder paroxysmal nocturnal hemoglobinuria, or PNH. First approved by the Food and Drug Administration in 2007, it is the only drug available to reduce the destruction of red blood cells for people with PNH. The drug’s narrow focus makes it less vulnerable to price controls. “When there are only a few thousand patients, forcing lower prices doesn’t save the health care system that much money,” Cowell says. (Share prices and returns are as of October 12.)

Moreover, Alexion has managed to find new applications for the drug. In 2011, Soliris was approved to treat another blood disease that can lead to kidney failure. Over the past seven years, Soliris sales have climbed by more than 30% annually.

Relying on just one drug is risky, which is why Alexion bought Synageva BioPharma in June for $8.4 billion. With the acquisition, Alexion now has two treatments for rare metabolic diseases that are expected to win FDA approval later this year, along with a roster of other drugs in development. The purchase will weigh on earnings in 2015; analysts on average expect Alexion’s profits to fall 7%, to $4.83 per share. But they see earnings climbing 23% in 2016, to $5.97 per share.

Celgene Corp. (CELG, $117.60) is another company that’s trying to build a stable of specialty drugs. Its biggest seller is Revlimid, a treatment for the blood cancer multiple myeloma. Celgene executives believe that Revlimid will generate up to $5.7 billion in sales this year, or 61% of the firm’s total revenues.

And like Alexion, Celgene is growing via acquisition, having purchased Receptos in August for $7.2 billion. Receptos has a promising drug, called Ozanimod, with applications for multiple sclerosis, ulcerative colitis and Crohn’s disease. If approved by the FDA, Ozanimod could generate sales of $4 billion to $6 billion annually, Celgene estimates.

S&P Capital IQ analyst Jeffrey Yoo argues that several things could boost Celgene’s stock before the end of 2015, including approval of Revlimid for newly diagnosed patients in Japan and the start of late-stage trials of a therapy for Crohn’s disease. On average, analysts forecast that profits will rise 30%, to $4.81 per share, in 2015, and 24%, to $5.96 per share, in 2016. With Celgene trading at 22 times estimated year-ahead earnings, the stock, which is 16% below its record high (reached last July), looks cheap. Yoo’s 12-month price target is $166.

Selling for less than 9 times estimated year-ahead profits, Gilead Sciences (GILD, $99.51) looks astonishingly cheap, not just for a biotech stock but relative to just about everything. Gilead, the largest biotech company in the world by stock market value ($146.3 billion), makes top-selling treatments for HIV and hepatitis C. But growing competition and concern about drug prices—Gilead’s hepatitis C regimens can cost nearly $100,000—have put pressure on the stock, which has fallen 19% since hitting a record in June.

Still, Connor Browne, comanager of the Thornburg Value Fund, says that even if the company has to accept lower prices on its drugs, the efficacy of Gilead’s treatments could boost usage. What’s more, Gilead has opportunities to expand overseas. During the second quarter, for example, Gilead reported that 31,000 people in Europe started its hepatitis C regimens, up from 21,000 during the first quarter. And Sovaldi, a hepatitis C treatment that Gilead began marketing in the U.S. in 2013, was rolled out in Japan in May. Meanwhile, 80% of all people receiving HIV treatments in the U.S. are taking a Gilead product, and the company is likely to get approval from the FDA for an advanced HIV-therapy in 2016.

Analysts expect Gilead’s earnings to soar 44%, to $11.62 per share, in 2015 but to remain essentially flat in 2016. Gilead regularly exceeds earnings expectations, however, and its stock is “very cheap,” Browne says. The company began paying a dividend in the second quarter—the rate is 43 cents per share—and it likely will raise the payout in the years ahead.

If you don’t want to own just one or two individual biotech stocks, you can easily get exposure to the industry through an exchange-traded fund. The iShares Nasdaq Biotechnology ETF tracks a market-capitalization-weighted benchmark of 145 biotech companies of all sizes, including Alexion, Celgene and Gilead. Annual expenses are 0.48%. If you prefer an actively managed fund, consider Fidelity Select Biotechnology Portfolio (FBIOX), which charges 0.74% a year for expenses. Manager Rajiv Kaul tends to favor small companies with the potential for big returns, a strategy that has paid off lately—over the past year, Select Biotech earned 22.7%, beating the return of the iShares ETF by 5.1 percentage points.