Figuring out when—or even if a company's prospects will improve is tricky work. 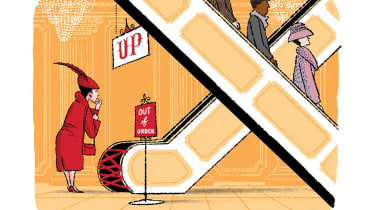 As if finding bargain-priced stocks in a sky-high market weren’t difficult enough, investors who hunt for undervalued names face the threat of succumbing to value traps. These stocks masquerade as temporarily beaten-down shares of promising companies, but are, in fact, trading at depressed prices because of long-term problems with the business. The difference between true value plays and value traps becomes apparent in hindsight: The former eventually bounce back, while value traps continue to sag.

Picking the winners is often more art than science. Start by asking yourself two questions, advises John Linehan, who manages a number of value-oriented mutual funds at T. Rowe Price. First, do the company’s problems seem fixable within a time frame you can live with? If the answer is yes, the stock deserves further consideration. Second, imagine that the company didn’t exist, then ask yourself if people would care. If the answer is no, says Linehan, you’re probably looking at a company without staying power.

Look for something that will spark change. Tom Bastian and Brian Jurkash, who comanage the Invesco Growth and Income Fund, will invest in an unloved business only when they can identify a catalyst, such as a management shift, that could propel the firm back to success. But if what appeared to be a catalyst doesn’t pan out, the stock becomes a potential candidate for sale, they say.

Determine how much patience is warranted. Growing competition and declining demand should concern investors, says Parnassus Fund manager Robert Klaber. But those conditions aren’t deal-breakers for innovative companies that can create new products or find different markets, he says. “If there doesn’t seem to be much innovation on the horizon, that could be a sign of a value trap,” says Klaber.

With those tips in mind, we’ve singled out three stocks we believe are more traps than bargains.

Even in the challenging brick-and-mortar retail sector, the situation at J.C. Penney (symbol JCP, $3) looks especially dire. The stock traded at $86 a share a decade ago. Now, investors hoping for a comeback will have to rely on a retailer that analysts at Credit Suisse say is poorly situated to handle customers’ increasing preference for shopping online.

Shares of blue-chip tech behemoth International Business Machines (IBM, $155) look cheap at just 11 times estimated earnings for the year ahead. But the company’s legacy business (selling IT infrastructure, such as computers and mainframes) is shrinking. The firm is shifting to cloud computing and artificial intelligence, but it faces stiff competition from the likes of Amazon.com and Alphabet.

Digital memory firm Seagate Technology (STX, $40) is a leading maker of hard disk drives. But that technology is increasingly ceding ground to faster, more stable solid-state drives, which do not account for a meaningful portion of the company’s revenues. Seagate’s shares sit 41% below their 2014 highs—and yield a tempting 6.2%—but analysts at Morningstar say the firm will have trouble increasing revenues without changing its business model.