Why United Stock Will Leave the Legging Fuss on the Tarmac

Its shares are clear for takeoff this year, as are those of other major airlines that have survived a shakeout. 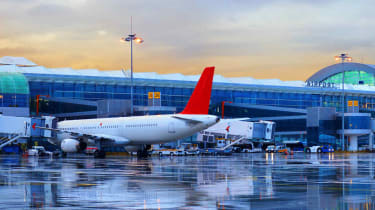 Investors, leggo of the leggings. United Airlines' decision to bar two teenagers dressed in leggings from boarding a plane Mar. 26 put a harsh spotlight on United Continental Holdings (symbol UAL) for all the wrong reasons. UAL and other airline stocks appear to be ready for a smooth rise in share price.

In case you missed it, social media lit up after another passenger tweeted about the incident Sunday morning. Soon, celebrities such as model Chrissy Tiegen and actor Seth Rogan weighed into a firestorm of outrage. United defended its decision, which violated a dress code.

This distraction is a shame because what people should really be talking about is United's attractiveness as an investment.

Airline stocks are in favor these days thanks to lower fuel prices, industry consolidation and firmer ticket prices. After decades of criticism, even Warren Buffett has turned bullish on airline stocks—and that’s no small feat.

Buffett once famously quipped that "if a farsighted capitalist had been present at Kitty Hawk, he would have done his successors a huge favor by shooting Orville down." He’s since come around (Buffett, not the Wright Brothers).

In November, Buffett disclosed new stakes in United, American Airlines (AAL) and Delta Air Lines (DAL). A February regulatory filing revealed that he also started a position in Southwest Airlines (LUV). Part of the appeal is that with only four major carriers left -- down from seven in 2000 -- the industry isn't struggling with too much competition.

Even if you don’t follow Warren Buffett, you should still understand why United, Delta, American and Southwest Airlines look like good bets.

Let’s start with United. Shares are actually up 2.5% since leggings-gate started trending.

Smart investors were right to stand fast. Analysts at UBS call shares in United Continental a "buy" in part because the airline is on target for better earnings growth vs. peers, even as the shares offer a better bargain.

The stock is priced at 10 times expected earnings, according to Zacks Investment Research. Those same earnings are expected to rise by 20% year-over-year in 2018. Of the 13 analysts covered by Zacks, seven have it at "buy" and four call it a "hold." Their average price target of $80.62 implies a gain of 17% in the next 12 months or so.

It's not hard to see why Buffett likes American Airlines as well. Analysts at investment bank powerhouse Stifel say its stock is "seriously mispriced."

Investors have yet to fully grasp the value of the company's loyalty program, a Stifel analyst argues. The company’s AAdvantage program generates approximately half of the airline’s operating profits. Revenue is growing 10% and it has very high margins, Stifel notes. Once investors realize the profit potential of the loyalty program, the stock should soar, Stifel says.

Stifel set its price target at $95 a share. That implies shares will more than double in the next year. No wonder Stifel named American as its top airline pick and assigned it a "buy" rating.

Analysts likewise remain bullish on Delta Air lines. Of the 11 analysts reporting to Zacks, eight have it at "strong buy," two call it a "buy" and one has it at "hold." In part that's because Delta is relatively cheap vs. its rivals.

Both Delta and the broader industry are forecast to generate annualized growth of 9% over the next five years, according to Zacks. But Delta's stock trades at 9 times expected earnings, while the industry goes for almost 20.

Southwest Airlines is different from the other three. It’s not a network carrier, which operate major hubs for domestic, regional and international flights. Such operators also tend to have large, complex fleets, alliances with other airlines and a host of other services.

Although that makes Southwest the smallest of the major carriers by revenue, analysts still like the stock, albeit with less ardor. Seven analysts rate it a “strong buy” and one calls it a “buy.” But six say it’s a “hold.”

Analysts, on average, project annualized earnings growth of 10% over the next five years, vs. 9% for the wider industry. Analysts’ average price target of $60.30 implies upside of 11% over the next year.