Sears Woes Could Spread to Other Major Brands 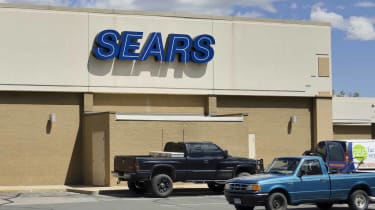 Trouble grows for Sears, the iconic American retailer. After years of falling sales and losses, Sears Holdings (symbol SHLD) is warning that it's in danger of running out of cash and ceasing operations. As Sears goes, a number of stocks with close ties to Sears could be hurt as well.

Consider what's happening at Under Armour (symbol UA). The athletic apparel company has seen its growth rate slow to an eight-year low following the bankruptcy of retail partners The Sports Authority and Sport Chalet. Shares in Under Armour have lost more than half their value over the past year as a result.

The management of Sears Holdings, which also runs Kmart, said in its regulatory filing Mar. 22 that there is increasing uncertainty as to whether Sears can keep its doors open. "Our historical operating results indicate substantial doubt exists related to the company's ability to continue as a going concern," the company said in its Form 10-K annual report filed with the Securities and Exchange Commission for the fiscal year ended Jan. 28.

So-called “going concern" warnings don't automatically mean a company is headed for bankruptcy. They can, however, serve as a prelude to a Chapter 11 filing. Sears, in essence, is running out of money and saying it may not be able to raise more through asset sales or borrowing.

This should come as no surprise to investors, given the venerated company's long downward trend. What investors might not be aware of are some of the other well-known stocks that could get hurt in a worse-case Sears scenario:

Seritage Growth Properties was spun off of Sears in 2015 as a real estate investment trust that owns and operates malls. Although a number of REITs have exposure to Sears, the troubled retail chain is Seritage's largest tenant. That's in part why Boenning & Scattergood analysts rate Sears stock at "underperform/high risk" (sell, essentially).

Lands' End depends on Sears for almost all of its retail outlet revenue. As of Oct. 28, 2016, 216 of Lands’ End's 235 outlets were located in Sears locations, according to regulatory filings. In the three months ended Oct. 28, these retail locations accounted for almost 15% of Lands' End's total revenue.

Sears is a major outlet for Whirlpool products. Sears sells Whirlpool appliances under the Kenmore brand, as well as Whirlpool and Kitchen Aid brand products. Even with all its woes, Sears is still the third-largest appliance retailer by market share, according to market researcher Twice.