Instead of paying attention to all the campaign hoopla, focus on protecting your portfolio in these uncertain times. 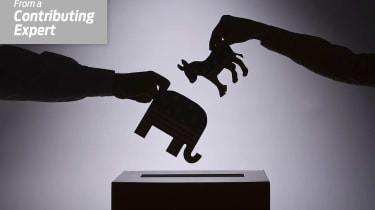 Each election year, myths of all kinds are presented as gospel to investors. This year, investors might be especially at risk since this presidential election is, well, pretty crazy. Unfortunately, many of the myths are spun by people with an agenda. They are thinking about themselves or their political party, not investing for real returns. Here are a few of the more common myths in presidential election years.

1. The stock market always goes up in presidential election years.

The reasoning behind this myth is that the politicians don't want investors upset going to the polls in November. Sounds plausible—if you believe presidential administrations have some sort of control over the markets. Actually, this myth may have a kernel of truth because of two things: the Federal Reserve has shown it is not shy about influencing, some might say supporting or interfering with, the markets; and yes, each administration would love to have its party win the White House.

The problem is that the numbers just don't support the myth. Looking at Standard and Poor's Composite Stock Price index dating back to 1872, as reported Robert Shiller's Irrational Exuberance, presidential election years have the lowest median annual rate of return of all four years of a presidency. The third year is typically the best year for market performance, returning a little more than double the fourth year's median return.

2. If the current administration is Republican/Democrat (take your pick) during the Presidential election year, the market will go up.

This may be more about political leanings than actual data. The S&P Composite index shows a slight advantage with Republican presidents sitting in the Oval Office in election years. Since 1872, there have been market gains in presidential election years for 11 sitting GOP presidents and seven for Democrats. But when the Republicans were in the White House, the market dropped five times during the election year—and two of the worst plummets were under Herbert Hoover in 1932 and George W. Bush in 2008. The market dropped four times when Democrats were in office.

Bottom line: It’s statistically a draw. Republicans might have a slight advantage, but not by much.

3. The market predicts who will win the presidency.

Again, statistically, not enough to say with any confidence that a rising or declining market favors either party.

4. Republican/Democratic administrations are better for the market.

This is more about the whole term. So I measured how much the market gained or lost during various stretches of one or the other party in office (meaning the Kennedy/Johnson administrations counted as one term and the Reagan/Bush administrations also count as one).

Now, before everybody drops their political affiliations to join the party with an elephant or a donkey as its mascot, there are a few things to consider. In order to believe that this is anything more than a statistical anomaly, one would have to believe that the party of the commander-in-chief makes a difference to the stock market.

Frankly, I prefer to focus on economic and market data. Market valuation and economic activity might have a stronger impact on the markets than which political party is in office.

Truth is, these correlations are coincidence. There are too many other influences that have a much more direct impact on the market.

Believing in myths will not help your investment portfolio. Understanding your own portfolio's risks and your own risk tolerance is more important. In the current environment—with domestic civil unrest, global terrorism, a crazy presidential election, a slowing economy and a high market valuation—risks are high and could be getting higher. Investors should be thinking more about protecting themselves from macro-economic dynamics than listening to narrow, self-serving political myths.