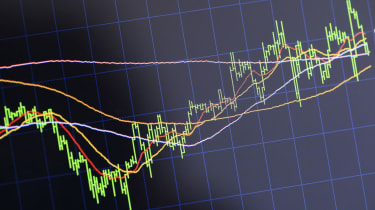 To many fundamental analysts, who base market calls on corporate earnings prospects, economic growth, interest rates and the like, divining the direction of the stock market by poring over stock charts to detect patterns and mathematical sequences might as well be reading entrails. To its detractors, so-called technical analysis is little more than mumbo jumbo. Warren Buffett famously dissed it when he quipped that he realized it didn’t work when he turned the chart upside down and got the same answer.

Nonetheless, a number of Wall Street’s best and brightest incorporate technical analysis into their prognostications—and the picture they’re getting now is downright scary. “I’m more of a fundamentalist, but I like to stay on top of the technical indicators as well,” says economist and market strategist Ed Yardeni, of Yardeni Research, an institutional research firm. “The price action on charts reflects supply and demand and it’s also an important reflection of the psychology of the market,” he says. “I look at technical indicators to see whether they corroborate or contradict the fundamentals that I see.”

For now, technical indicators are contradicting Yardeni’s fundamental bullishness, telling us that what looked like a garden-variety market correction might be something worse. The market’s performance on September 28—the Dow Jones industrial average plunged 313 points, or 1.9%—did little to console the bulls. Among the technical red flags:

Bearish connotation: The cross can mark the point at which a market downturn snowballs. On September 28, the Nasdaq Composite index joined the Dow industrials and Standard & Poor’s 500-stock index, which had produced the ominous pattern in August. Eight of 10 S&P 500 sectors—all except for health care and consumer non-essentials—have joined the Death Cross club.

But the death cross’s record at predicting longer-term declines is mixed. The death cross provided a prescient warning in 2007, but although share prices stumbled in the second half of 2011 after the death cross appeared, the decline never reached the 20% threshold required to be considered a bear market and the bull market resumed.

When the Dow Jones averages, especially the transportation and industrial averages, move in tandem it signals confirmation of a trend. When they diverge, the trend is in jeopardy.

Bearish connotation: The transportation and utilities averages peaked in December 2014 and January 2015, respectively, while the industrials moved higher through May—a separation that signaled trouble for the bull. Worse, both the industrials and the transports fell below their October 2014 lows on August 25, a bear market warning sign.

The transports are down 15% from their record high—a deterioration that Yardeni finds hard to explain, given how strong basic business conditions appear to be for the sector. Rail car loadings of goods headed to retailers are healthy, as is trucking. West Coast ports are busy. And fuel costs have declined tremendously. “It’s unsettling to see transports among the weakest stocks in the market, especially since they’d been such leaders during most of the bull market,” says Yardeni.

Subtracting the number of declining shares from the number of advancing ones (say, on the New York Stock Exchange) and tracking totals over time gives an indication of the market’s breadth—essentially a measure of how many stocks are participating in an uptrend (or the opposite.) For context, consider that in the waning months of the 1990s tech bubble, 20% of stocks in the S&P accounted for 80% of the index’s movement.

Bearish connotation: When the advance-decline line peaks ahead of a market index, “that’s a classic warning sign at market tops,” says James Stack, publisher of InvesTech Research, a market newsletter. The A-D line hit a high in late April. “The market held up in June and July, but fewer and fewer stocks were holding it up,” says Stack.

You can tell whether the bulls or the bears are in charge by the number of stocks hitting new 12-month highs or lows, regardless of whether broad market indexes themselves are rising or falling.

Bearish connotation: More than 50 to 100 stocks a day hitting new lows for a sustained stretch tells you that leadership is coming from the bear camp. As of September 28, 50 or more stocks hit new lows in nine of the past 10 trading days, according to InvesTech; in six of the 10 days, 100 or more did so. The last time new highs outpaced new lows, on a weekly basis, was the week ending June 26.

In the perverse world of Wall Street, investor sentiment is a contrary indicator—the more bulls there are, the more bearish the outlook. It makes sense when you consider that bull markets peak, by definition, when every last bull has bought into the market.

Bearish connotation: Sentiment is one of the only bright spots among technical indicators. The number of bearish investment advisers surveyed by Investors Intelligence, a technical analysis research firm, reached 30.2% on September 22, up from 26.8% a week earlier, and the highest reading since late 2011.

Technicians like to zero in on index levels where it looks like the market can have a breakthrough, or where it can find support. Many are hoping the market will find support at the low levels reached on August 25—around 1867 on the S&P and 15,666 on the Dow industrials. As of the September 28 close, the Dow and S&P 500 are only 14 points and 336 points, respectively, above their August 25 lows. Says Yardeni: “If we retest and the market holds I guess they’ll be satisfied that the market has enough resilience to rebound. If it cracks below, everyone will be talking about a bear market.”