Greece Won’t Turn Into a Tragedy for Long-Term Investors 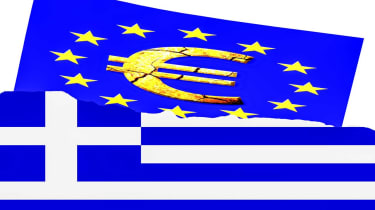 It might be too much to ask investors to ignore the debt crisis in Greece—how can you miss it when Standard & Poor’s 500-stock index fell more than 3% in four trading days in late June, and is still 2% below its June 23 close? But the problems of Greece, and the Greek people, although monumental, are of little concern to long-term investors, here or abroad—and may even present bargains for those who can withstand the volatility in the short run.

The drama—worthy of Euripides—centers on whether debt-ridden Greece will default on its debt and exit the eurozone instead of submitting to austere economic reforms in exchange for another cash infusion from its creditors. On July 5, voters rejected proposed reforms, forgoing the cash. Talks are continuing, with the next crucial deadline coming July 20, when Greece must make a $3.9 billion bond payment to the European Central Bank. Defaulting on the payment could mean that the ECB cuts its lifeline of emergency funds to Greece’s banks, prompting Greece to abandon the euro in order to make crucial payments with its own currency.

The stakes are enormous for the Greek people. On average, 59 Greek businesses have gone bust every day since the start of 2015, notes Stephanie Flanders, chief Europe strategist for JP Morgan Asset Management. Banks are closed and ATM withdrawals are limited. Trading markets are also dark for now. But most investors should look past the crisis. “For global investors, the question will continue to be whether any major economic, financial or political ripple effect is likely to emerge from this crisis. As of right now, the answer still appears to be no,” says David Kelly, chief global strategist at JP Morgan Funds. In other words, resist the urge to trade on Greek headlines, unless you’re tempted to bargain hunt. Here’s why:We’ve seen this play before. What if our worst fears of a “Grexit” are realized? The stock market has weathered a variety of shocks over the past 70 years, including wars, assassinations, terrorist attacks and financial collapses, says S&P Capital IQ strategist Sam Stovall. Looking at a list ranging from the Cuban Missile Crisis to the U.S. debt downgrade in 2001, Stovall says the market has fallen a median 2.4% on the day following such shocks, bottoming after eight days with a median loss of 5.2% and recovering completely after 14 days, on average. “History has shown that prior market shocks have usually proven to be better opportunities to buy than bail, primarily because the events did not dramatically alter the course of global economic growth,” says Stovall.

We’ve got other things to worry about. In the U.S., the three most important issues for investors are economic growth, interest rates and corporate earnings, says Kelly. Steady job growth as well as strong home and vehicle sales bode well for the economy. The Fed may raise rates modestly in September, but the International Monetary Fund is among those calling for a delay until 2016. And as second-quarter earnings season kicks off, given continued recovery in the U.S. economy and moderating strength in the dollar, companies should have an easier time beating analysts’ lowered expectations, says Russ Koesterich, Blackrock’s chief investment strategist.Greece’s economy is tiny. Greece has a gross domestic product of roughly $242 billion, representing less than 2% of the total eurozone GDP.

European banks aren’t at risk. European bank exposure to Greek loans is estimated to be approximately $50 billion, down from $250 billion in 2008.

Central bankers have tools to keep problems from spreading. The ECB will be proactive in preventing contagion of other European bond markets and the broader banking system. Long-term refinancing operations will continue to infuse European banks with cash, to be repaid over a long period of time. And the ECB could increase or accelerate its quantitative easing program, buying up regional bonds in order to stimulate economic growth. So far, the crisis seems to be contained: Government bond yields in Italy, Spain and Portugal, considered most vulnerable, have risen moderately, in contrast to sky-high yields on Greek bonds, reflecting the risk of holding them.

Greece’s struggles mask a strengthening economy in Europe. “There are a number of economic indicators suggesting a bounce,” says Jim Paulsen, chief investment strategist at Wells Capital Management. For example, the June composite purchasing manager’s index, a measure of the health of the manufacturing sector, reached its highest level in more than four years. Consumer confidence is at a 13-year high in Germany, notes Audrey Kaplan, head of the international equity team at Federated Investors. Growth in gross domestic product is forecast to be 3% in Spain—better than in the U.S. Consumer spending and business investment is on the upswing in France. And even Ireland, in the same boat with Greece five years ago, has put its fiscal house largely in order.

A game plan for investors

What should investors do? If you’re satisfied with your portfolio allocation, simply ignore the headlines. But consider bargain hunting abroad. “I like the eurozone,” says Paulsen. He thinks international markets will better withstand a market correction that he believes is coming, and present greater relative value. “They’re where we were a couple, three years ago.” Wells Fargo has suggested for some time that investors bump up their allocation to European stocks—figure two percentage points more than your normal weighting. “Our view hasn’t changed. We still consider Europe a buying opportunity today,” says Paul Christopher, head of international strategy for Wells Fargo Investment Institute.