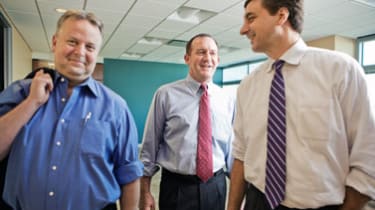 After a year when nearly everything worked, why make changes? As the saying goes, "If it ain't broke, don’t fix it." Over the past 12 months, most markets posted gains. Standard & Poor’s 500-stock index returned 16.2%, and developed foreign markets climbed 12.8%. A broad index of high-quality U.S. bonds earned a modest 2.7% over the 12-month period, but high-yield corporate bonds and convertible bonds produced double-digit gains.

As for the Kiplinger 25, the list of our favorite no-load mutual funds, all but one (a commodity fund) gained ground. In one way, that made our task in compiling this year’s list easier than usual—we didn’t have to consider removing any funds for outright awfulness. (For more on how our funds fared in 2012, see A Wonderful Year for the Kip 25). All returns below are through March 8.

But this year, we decided to take an extra-close look at the bond funds in the Kip 25. Bond investing isn’t easy these days. Yields on supposedly low-risk Treasury bonds remain in the gutter, and the additional interest you collect from lesser-quality bonds is low by historical standards. When interest rates begin to rise in earnest, bonds will lose value and so will funds that invest in them (the yield on the ten-year Treasury bond has already jumped from a low of 1.4% last July to 2.1%).

Because the Federal Reserve is committed to keeping rates low until the economy is on sounder footing, we don’t expect that a bear market is imminent. But in the interest of safety in a category that is normally the province of cautious investors, we wanted to include more bond funds that are well positioned to withstand rising interest rates.

In particular, we chose two new bond funds from the closely related multisector and unconstrained categories. And we avoided funds with hefty stakes in long-term government bonds, which are especially sensitive to rising rates, and focused instead on funds with lower average durations, a measure of interest-rate sensitivity. We also added a new emerging-markets stock fund. (See more on how we choose all the funds in the Kip 25.)

The managers of some emerging-markets stock funds start by assessing the big picture. At Harding Loevner Emerging Markets, the focus is on finding outstanding companies.

The process starts with screens. Managers G. Rusty Johnson, Craig Shaw and Richard Schmidt use filters to identify growing, high-quality companies—firms that boast high and sustainable profit margins and return on equity (a measure of profitability), carry little debt, and exhibit consistent growth, as measured by rising sales, profits or dividends. Then they dig deep, talking to company officials, competitors and industry analysts who cover the stock. The managers make their own sales and profit forecasts, which they use to estimate what they think a company is worth.

Finally, all of the portfolio managers and analysts at Harding Loevner, a Bridgewater, N.J., firm that focuses on foreign stocks, discuss the companies under consideration. "People beyond the emerging-markets team are key to the discussion," says Johnson. "Collective teamwork provides insight and minimizes errors."

The resulting 75-stock portfolio covers 17 of the 21 major emerging markets, such as Brazil, China and India, as well as a smattering of frontier nations, including Nigeria and Qatar. The managers avoid real estate and utility firms, two groups they think fail to deliver consistent returns. Rather, the fund is heavy on technology, financial, industrial and consumer-products companies, including electronics giant Samsung and AIA Group, a financial-services firm based in Hong Kong. Says Johnson: "We believe in deviating from the benchmark by buying more of what we have confidence in." Since its November 1998 inception, the fund has gained 14.2% annualized, outpacing its benchmark by an average of 1.6 percentage points per year.

Stephen Kane likes to call Metropolitan West Unconstrained Bond a "best ideas" fund. That’s because although Kane and co-managers Laird Landmann and Tad Rivelle make the big-picture calls, they rely on their firm’s deep bench of analysts and portfolio managers (almost 70 people in all) to supply their best ideas. "The fund is not constrained by a benchmark," says Kane, "so we can concentrate on our best ideas without being concerned about owning too much or too little relative to an index."

Kane and colleagues have built a portfolio designed to protect against rising interest rates. For starters, they have 26% of the fund’s assets in mortgage securities that aren’t guaranteed by U.S. government agencies and 14% in emerging-markets corporate bonds issued in local currencies (the non-agency mortgages have higher yields than agency mortgage securities, such as Ginnie Maes). In addition, the managers have sold short Treasury futures, a position that will gain in value if bond yields rise. By doing so, they’ve shortened the fund’s average duration to a superlow 1.3 years. That suggests that Unconstrained Bond would lose 1.3% if interest rates rose one percentage point. The fund yields 2.9%.

Unconstrained Bond has delivered impressive results in its relatively short history. Since its launch in September 2011, it has returned a cumulative 27.2%. That beats its average peer—nontraditional, or go-anywhere, bond funds—by 18.2 percentage points.

Kane, Rivelle and Landmann started their careers at Pimco in the 1990s. After a brief interlude at Hotchkis & Wiley to launch a fixed-income division, they founded Met West in 1996. TCW, another California-based money-management company, bought Met West in 2010.

Osterweis Strategic Income doesn’t bet against bonds the way Met West Unconstrained does, but that doesn’t mean its managers are hemmed in much. Co-managers Carl Kaufman and Simon Lee have the freedom to invest large chunks of the portfolio in almost any kind of debt, including investment-grade and junk corporate bonds, convertibles, U.S. government bonds, floating-rate debt, foreign IOUs and preferred stock.

Lately, Kaufman and Lee have favored high-yield debt and convertible bonds—especially ones with maturities of three years or less. Thanks to those short-maturity bonds, the portfolio’s average duration is a trim 2.7 years, which implies the fund would lose 2.7% if rates rose one percentage point. Of late, Kaufman and Lee have let cash build to historically high levels of about 14% of assets, in anticipation of rising yields (and falling bond prices) later this year.

Osterweis’s recent record is one of lagging in strong markets but hanging tough in rough ones. In 2008, when the average multisector bond fund lost 15.4%, Strategic Income surrendered just 5.5%, beating 95% of its rivals. The next year, it gained 24.9%, a great absolute return, but four percentage points less than its typical peer. Even so, the fund’s ability to limit losses has led to superior long-term returns.