An Investment Poised to Benefit from Infrastructure Spending 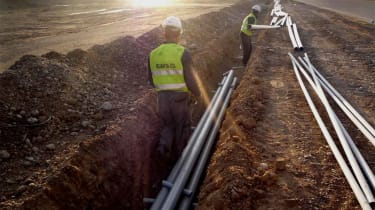 Europe’s economy was hobbling even before Britain voted to go its own way last June. Now, the eurozone may have even less spring in its step. Estimates for economic growth and corporate profits in the region have been sliding. Although some countries may fare well in this climate, it may not be the best time to invest in an exchange-traded fund that covers wide swaths of stocks across the pond.

That’s why we’re removing WisdomTree Europe Hedged Equity (symbol HEDJ) from the Kiplinger ETF 20. Over the past year, the fund posted a modest loss of 1.4%. That crushed rivals such as iShares Core Europe ETF (IEUR), which lost 6.1%, largely because the WisdomTree fund hedges its exposure to the euro (which has weakened against the dollar, making stocks priced in euros worth less when converted to greenbacks). But a weak euro isn’t reason enough to keep the ETF, partly because we’re not convinced that the euro will continue to slide. We see better opportunities in funds that aren’t as closely tied to Europe’s fortunes.

A more appealing ETF is iShares Global Infrastructure (IGF), which we’re adding to our lineup. The fund’s 75 stocks are mostly utilities, pipeline firms and operators of other types of infrastructure, such as shipping ports, toll roads and airports. U.S. companies account for 38% of the fund’s assets, with the remainder divided mostly among developed foreign markets. Holdings range from Transurban Group, Australia’s largest operator of toll roads, to Italy’s Atlantia, which manages Rome’s airport as well as toll roads in several countries. In the U.S., the ETF owns pipeline stocks such as Kinder Morgan, along with conglomerates such as Macquarie Infrastructure, which runs private-airport services, fuel terminals, and gas utilities in Hawaii and New Jersey.

These aren’t fast-growing businesses. But they generate steady income and pay dividends that should climb as their revenues rise. The ETF yields 3.3%—well above the 2.2% yield of Standard & Poor’s 500-stock index. But the fund’s long-term results aren’t exactly scintillating. Over the past five years, it returned an annualized 7.0%, about half as much as the S&P 500.

But the fund has excelled lately, gaining 13.7% in the first 10 months of 2016. It could keep climbing, too, if infrastructure spending picks up, as expected. Donald Trump has indicated he aims to boost such spending by more than $500 billion after taking office in January (although he will need Congress to go along). Governments in Europe and other parts of the world may also boost spending to help jump-start weak economies.

Two drawbacks: The fund’s annual expense ratio is 0.47%. That’s high compared with ETFs that track traditional indexes, such as the S&P 500. And because utilities represent about 40% of the fund’s holdings, the ETF could suffer if interest rates were to rise sharply.