A Technology ETF With Balanced Holdings

With First Trust Nasdaq-100-Technology Sector Index fund, the smallest companies get the same weighting as Apple. 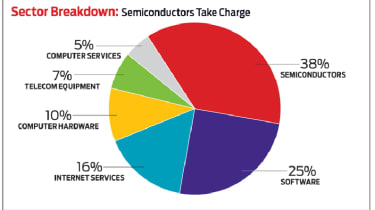 Technology stocks have been on a roll. Over the past 12 months, the sector returned 25.1%, besting Standard & Poor’s 500-stock index by two percentage points. First Trust Nasdaq-100-Technology Sector Index Fund has done even better, with a 34.3% gain over the past year.

Although the exchange-traded fund holds just 41 stocks, it manages to capture a broad swath of the sector, from Apple to Chinese search engine Baidu to Cerner, a health care information-technology firm. Much of the fund’s recent success stems from its hefty exposure to semiconductor stocks, which account for nearly 40% of its assets. One of the fund’s chip stocks, Avago Technologies, soared 124% over the past year, and another, Micron Technology, more than doubled.

The ETF tracks the tech companies in the Nasdaq-100 index, which consists of the largest nonfinancial com­panies that trade on Nasdaq. Traditional index funds weight companies by market capitalization, which means the greater a company’s value, the bigger its position in a fund. The First Trust ETF, by contrast, weights each holding equally, rebalancing four times a year to maintain each stock’s equal standing. By devoting roughly 2.4% of assets to each holding, the ETF ramps up its exposure to smaller firms, some with market values of less than $10 billion. At the same time, the fund gets a small income boost from some larger dividend-paying holdings, including Apple, Intel and Microsoft. The ETF yields 0.8%.

K11I-ETF SPOTLIGHT.indd
Share via EmailShare on FacebookShare on TwitterShare on LinkedIn

The stock market will take a pause on Thanksgiving, but investors will need to pay attention for a few hours on Black Friday.
BCSVX: A Foreign Fund With Flair