Despite plunging oil prices and profits, these four energy giants should be able to maintain their fat payouts. 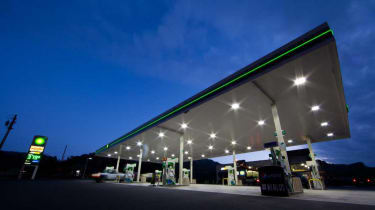 Energy stocks have been a horror show this year, eaten by the blob of low-priced oil. Many stocks have slumped 30% or more as oil prices have plunged and industry profits have trickled away. Don’t expect much relief in 2016 either; Kiplinger expects the price of West Texas crude to range from $45 to $55 a barrel, compared with the September 15 close of $44.59.

Painful as this may be, the major oil-and-gas producers are strong enough to survive. And Big Oil knows what investors want in lean times like these: a safe and secure dividend. Although industry profits have practically evaporated, corporate bosses are taking steps to maintain their dividend streams: tapping into cash on balance sheets, cutting costs and using other financial means to keep paying. Assuming the dividends keep rolling in, investors can effectively get paid to wait for a recovery in oil prices. If crude eventually does climb, the stocks will pay off handsomely. (All share prices are as of September 15.)

Start with Exxon Mobil (symbol XOM, $72.86), the largest U.S. oil-and-gas company, with a market value of $304 billion and a dividend yield of 4.0%. Hammered by a decline in profits from oil-and-gas production, Exxon’s earnings plunged by 52% in the second quarter from the same period a year earlier, to $4.2 billion. But profits from its “downstream” business—refining and petrochemical production—climbed by $795 million, to $1.5 billion.

Overall, Exxon reported $3.9 billion of free cash flow in the quarter (calculated as cash profits from operations and asset sales, less capital spending and other expenses). That was enough to cover the $3.1 billion in dividends Exxon paid. Moreover, free cash flow is likely to pick up in coming years as profit margins increase and Exxon lowers annual spending on oil-and-gas projects, says Morningstar analyst Allen Good.

Exxon could take other measures to cover its dividend in a pinch: tapping into the $4.3 billion in cash on its balance sheet, issuing more debt, and reducing or suspending share buybacks. Even if oil plunges again, the dividend will be the last thing to go. Exxon has raised its dividend for 32 years in a row, hiking it even when oil prices collapsed to $32 a barrel during the 2007-09 recession.

Shares of Chevron (CVX, $77.17), the second-largest U.S. energy company, boast a juicy 5.6% dividend yield. Chevron is not as financially solid as Exxon, with about 50% more long-term debt on its balance sheet and lower annual earnings. Chevron has also been spending heavily to boost sales, including $54 billion on a liquefied-natural-gas plant in Australia—a project that has drained cash and won’t turn a profit for years.

But Chevron isn’t likely to cut its dividend. With spending on some major oil-and-gas projects winding down, profit margins and earnings should pick up. By 2017, the company expects free cash flow to cover its dividend. Until then, it’s taking other steps to fund payments: trimming its budget for exploration and production, selling assets and suspending stock repurchases. Wall Street expects profits to climb by 33% in 2016, to $4.59 per share.

ConocoPhillips (COP, $47.28) offers a slightly higher yield, paying 6.3%. Revenues are on track to hit $37.5 billion this year—down sharply from $55.5 billion in 2014—and analysts expect Conoco to lose 33 cents a share for the full calendar year.

Despite the red ink, Conoco hiked its quarterly dividend in July by a penny per share, to 74 cents. At the time, CEO Ryan Lance told investors not to fret, saying “the dividend is safe. Let me repeat that.” For now, the company is using cash on its balance sheet to shore up payments; it ended the second quarter with $3.8 billion in cash, down from $5.1 billion at the start of the year.

Conoco also plans to shelve some drilling projects and cut its exploration-and-development budget by about $1 billion a year until oil prices rebound. Earnings, meanwhile, should get a lift in 2016 as production picks up in North America and a new liquefied-natural-gas plant starts up in Australia. If oil prices recover modestly over the next few years, Conoco should have no trouble covering its dividend, says Brian Peery, comanager of the Hennessy Cornerstone Value Fund (HFCVX). “It’s a big ship and turning it around is difficult, but the company has done a good job,” he says.

Sitting atop the dividend ladder is British Petroleum (BP, $31.11), offering a stunning 7.7% yield. At $2.40 per year for each of BP’s American depositary shares, the dividend costs the company about $6.5 billion annually, a prodigious amount that, on the face of it, BP cannot afford. After shelling out $19.6 billion on oil-and-gas projects this year, the London-based company will lose $7 billion on a free-cash-flow basis, estimates Fadel Gheit, an energy analyst at investment firm Oppenheimer & Co. That means BP won’t generate enough cash to cover all its expenses, including its dividend.

In the years ahead, BP is likely to focus on squeezing more costs from its business, boosting production and selling assets, says Gheit. With $32.6 billion in cash on its balance sheet, the company can use some of that money to help pay the dividend and plug any holes in its operating budget. Its free cash flow deficit should slip to $3.7 billion in 2016. Moreover, BP looks cheaper than other oil giants, says Gheit, who estimates that BP trades at 12.6 times estimated earnings, compared with an industry average of 13.9. He has an “outperform” rating on the stock and expects it to reach $45 over the next 12 to 18 months.

BP has a wild card in its back pocket as well: a nearly 20% stake in the Russian oil giant Rosneft. BP is developing some major oil-and-gas projects with Rosneft, a Kremlin-controlled company that pays dividends to BP. Doing business with the Kremlin is risky, of course, but if BP can help Rosneft lift sales and profits, BP’s stake in the company will gain value and the stock “should be a home run,” says Charles DyReyes, an energy analyst with Brandywine Global Investment Management in Philadelphia. “Investors view BP as a mismanaged collection of assets,” he adds. “We think that’s just not true.”

These 21 stocks were doling out dividend increases as the coronavirus crisis accelerated – and as many stocks were cutting or outright suspending thei…
Closing Bell 7/2/20: Double Dose of Jobs Data Drives Stocks Higher

The Nasdaq closed the holiday-shortened week at all-time highs after Thursday's data dump showed progress on the American employment front.
Skip to ContentSkip to Footer