Secrets to Marital and Money Bliss

Yes, love and money really CAN mix. Use these practical techniques to cool off even the hottest financial issues. 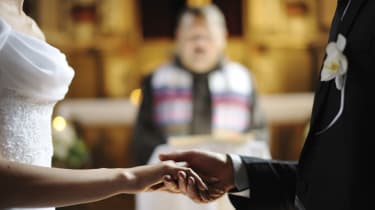 I was once asked to talk about finances to a small group of engaged couples attending a marriage preparation program. As I observed the couples, I felt as though I were watching a scene from Oprah focusing on dysfunctional relationships. What I saw were three textbook examples of how money and marriage don't necessarily mix well.

One man, Don, expressed annoyance that his fiancée, Louise, spent weekends at the mall shopping with her mother -- a colossal waste of time and money, in his opinion. Louise shot back that she had a job, and how she chose to spend her own money, and her Saturdays, was her business. She also pointed out that her shopping didn't cost any more than Don was spending on his hobby, golf.

Then there were Carlos and Maria. Although they weren't married, they had been together for some time and had two children. Their financial relationship was a traditional one, in which he was the breadwinner while she stayed home with the kids. He couldn't resist needling her about having no income of her own and complaining that she couldn't seem to run the household on the money he gave her. Maria retorted that she kept the household accounts and knew where every penny was going -- and if they didn't have enough to buy everything they wanted, it wasn't her fault.

Sitting on the other side of the room were Peter and Gabrielle, recent immigrants to this country. She was spending a lot of time and money scouting out native markets so that she could re-create the way of life he was used to back home. But what Gabrielle considered thoughtfulness Peter considered a wasteful extravagance -- a revelation that appeared to take her by surprise.

I couldn't help wondering whether any of these couples had a chance of making a successful marriage, given such obvious differences about money -- and, especially, their apparent unwillingness to compromise. It wasn't a question of, "Can these marriages be saved?" but, "Should these marriages take place?"

What went on in the room that night is typical of scenes in households all over America. Merging assets and combining money-management styles that often conflict are among the greatest challenges couples face. The situation is aggravated by the fact that when it comes to money, as in so many other aspects of our lives, opposites attract. If disagreeing about money were sufficient grounds for ending a relationship, we'd be a nation of celibates.

For the sake of keeping peace, women are often inclined not to make waves. But ignoring fundamental differences can be perilous to your marriage. The trick is to address the subject in a way that's not threatening either to the relationship or to your own financial well-being.

That doesn't necessarily mean keeping your assets scrupulously separate, or setting out the terms of your marriage in a prenuptial agreement (although it could mean both). At a minimum, it does mean talking about money early on and being willing to compromise. (See 4 Critical Money Questions to Ask Before You Get Married and Schedule a Money Date for more on how to broach the subject.)

Communication and compromise are critical to resolving money disputes with your spouse (or partner or significant other). But you also need practical money-management techniques to cool off some of the hottest issues:

1. Spending too much. Sometimes a spender is in conflict with a saver, and sometimes two spenders stroll hand in hand to the brink of bankruptcy. In either case, each of you would benefit if you wrote down your goals -- a new house, a Caribbean cruise -- plus how much you need to achieve them and whether you're on track. Once you see where you stand in dollars and cents, one of you may be convinced that you need to spend less, or the other may feel more comfortable about spending more.

Another solution is to allow each of you a slush fund to spend as you wish, with no questions or recriminations. Or agree that on purchases above a certain amount -- say, $500 or more -- you'll consult with each other before buying.

2. Passing the buck. Whether by design or default, one spouse generally ends up as the keeper of the books -- a situation that can make the bookkeeper bitter at being stuck with a thankless task, or make the other spouse resentful about being out of the loop. Sometimes the solution is as simple as taking turns managing the checkbook, or having regular conversations so that both of you are clear about what's going on and resentments don't fester.

Role reversal, in which each spouse does something characteristic of the other, is another way to resolve financial differences. For example, a hoarder might indulge in a spur-of-the-moment purchase, or a spender might slip some money into an envelope and put it aside. Then you can compare notes and reward yourselves (not necessarily with money).

And if all else fails, you can always hire a bookkeeper.

3. Taking risk -- or not. One of you treasures the safety of a bank certificate of deposit, while the other wants to take a flier on biotech stocks. Often it's men who are the risk-takers -- sometimes to a fault -- perhaps because they feel more confident in their ability to earn back any losses.

You can come to terms with different tolerances for risk if each of you realizes it doesn't have to be all or nothing. To control an impulsive investor, set a limit on how much he or she can risk -- say 10% of your assets. If you're reluctant to move beyond the safety of a bank, take it one step at a time by investing in an index mutual fund -- such as Vanguard's Total Market Index fund, which spreads the risk by investing in the entire stock market.

If you still can't reach an amicable agreement, you might seek investment advice from a neutral third party, such as a financial planner, who can act as a buffer to absorb some of the worry -- and any blame.

4. Merging your assets. To pool or not to pool? There's no single right answer to that question, as long as at least one of you is responsible for paying the bills and you're both comfortable with the system you've chosen.

For the sake of convenience, expect to meet each other halfway. It's easier to pay household bills from a joint account, for example, to which you both contribute based on your income. Nowadays, with the tendency of both spouses to be employed when they marry and to continue working, it's understandable if you each want to have a savings or checking account of your own as well, so you can spend money with no questions asked.

Women shouldn't fall into the pattern of taking over management of day-to-day concerns while their husbands make the big decisions about saving for college or investing for retirement, for example. He doesn't necessarily know anything more about these subjects than she does. And each person should be privy to the big picture in order to be an equal financial partner in the relationship.

Now let's return to the three financially dysfunctional couples I introduced earlier. Can their marriages be saved -- or should they even take place? Yes, if the couples are willing to follow the advice I've outlined.

For Don and Louise, who chafe at each other's spending habits, the solution is separate "slush funds" with an agreed-upon amount of money that each of them can spend with no questions asked. But they should have a single account for household expenses, and they should consult with each other about major household purchases above a certain amount.

Carlos and Maria, whose relationship was strained because Carlos, the breadwinner, criticizes Maria for being unable to stay within the allowance he gives her, could benefit from role reversal. He should become more familiar with the bills she's struggling to pay. She might consider a part-time job that would help the family finances and raise her standing in their relationship.

Peter and Gabrielle need to talk more about their goals to make sure they're in the open, and in sync. Gabrielle assumed that Peter would want her to re-create the meals, and the environment, of his home country. If that's not important to him, she'd be better off spending time and money on other things that have a higher priority with both of them.

In each relationship, communication and mutual respect would go a long way toward making a successful marriage.

Whether you’re planning ahead for your own heirs or have been asked to serve as an executor of an estate for someone else, it pays to understand what …
10 Things You'll Spend More on in Retirement

From reading materials to debt, the demands on your savings during your golden years might surprise you.
How to Finance Home Schooling Your Children

Despite the tensions brought on by the pandemic, a number of couples are waiting right now, with good reason.
Skip to ContentSkip to Footer