A Primer on Prenups 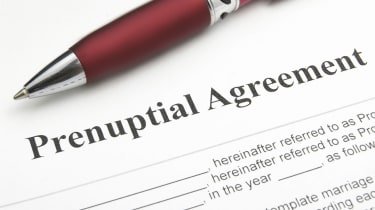 Readers, take note. Prenups aren't just the province of the rich and famous. A premarital contract not only helps you divvy up property in the case of divorce but also absolves you of your spouse's debts, carves out assets for children from a previous marriage, keeps a family business intact and ensures that the family home stays within the family. "A prenup preserves the expectations of the parties," says Robert J. Nachsin, an attorney who wrote I Do, You Do ... But Sign Here.

Not everyone needs a prenup. But if you have a large portfolio of assets or believe you will someday, you'll need an able lawyer to draft the document. Depending on where you live and how complicated your finances are, a prenup will run a few thousand dollars to as much as $25,000. Although some lawyers charge a flat fee, but more lawyers charge an hourly rate of $200 to $700.

Here are five tips for getting the job done right.

1. Bring it up early with your intended. Uncomfortable as the idea may seem, discussing a prenup as soon as things get serious can deepen, or at least clarify, a relationship, says Katherine E. Stoner, who wrote Prenuptial Agreements. At best, the conversation gives you a better picture of each other's circumstances and goals; at worst, it tips you off to potential deal breakers. "Some couples conclude they have such different expectations about property that they rethink the decision to marry," says Stoner. "I think that's a good thing."

As for timing, allow at least three months before the wedding to work out the details, and sign the document well in advance to avoid the appearance of duress. Courts often question the legitimacy of prenups that were signed within a week or so of the big day.

2. Take inventory. Each of you should list all assets, including their fair market value, along with debts, income and expenses. You don't have to cite every last pillowcase and placemat (such items can be lumped together as household goods), but take care to specify the disposition of sentiment-laden items, especially if you have children from a previous marriage. "Kids can get hung up on almost anything. You have to be very clear with that kind of thing," says Stoner. If you share ownership of a second home or a business, include your percentage of ownership and its proportional value; an accountant or real estate agent can help.

3. Look ahead. Most prenups provide that whatever property -- or debts -- you bring to the marriage will remain yours if the marriage dissolves. And they protect what you don't have -- say, property you expect to inherit or the riches that you will surely derive from your songwriting skills when you hit the big time. Planning a career as a rich doc? A prenup can compensate your spouse for putting you through med school or include a formula that divvies up your practice. A prenup also lets you each waive certain rights, including your right to inherit your spouse's property. Couples often use that clause to preserve their estate for children from a previous marriage.

4. Know the rules. You can stipulate how much weight your spouse gains (although you may have trouble enforcing it) or who gets custody of the puppy, but no state will allow you to waive child support, dictate child custody or otherwise impinge on the rights of your children. Some states prohibit you from waiving alimony and decline to enforce provisions that award financial compensation to a spouse whose partner has strayed. States also look askance at a document that gives one partner a financial incentive for divorcing the other.

Also make sure the prenup contains a so-called severability clause, which protects the basic contract regardless of challenges. "If one provision is stricken, the rest is still valid," Nachsin says.

5. Play fair. State laws aside, courts in most states won't enforce a prenuptial agreement that is stacked too strongly in favor of one partner, either in its terms or in the way it was negotiated. "The more one-sided it is, the more unpleasant the taste in people's mouth," says Stoner. For instance, a judge might disallow a prenuptial provision that leaves one partner destitute and the other with the bulk of the fortune. You're also on shaky ground if the process seemed rushed or if only one lawyer drafted the document.

In fact, the best strategy for avoiding disputes -- the whole point of a prenup -- is for each person to hire a separate lawyer. After that, says Nachsin, you and your beloved can "let the lawyers negotiate while you focus on the fun." It will make the honeymoon all the sweeter.