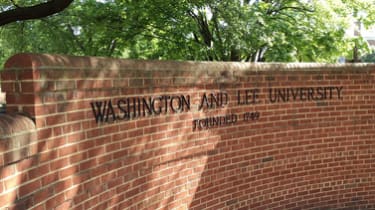 Washington and Who? If you don’t hail from the South, you may be unfamiliar with Washington and Lee University. But this pint-size liberal arts college is making a name for itself as an outsize undergraduate value. Number one for the first time on Kiplinger’s liberal arts list, it has been flirting with first place for several years, landing in our top ten consistently since 2007.

Our top private university needs no introduction. Yale heads our ranking for the second consecutive year. Yale meets 100% of need and extends need-based aid to families earning as much as $200,000 per year. The average net price weighs in at $15,435.

With a 7% admission rate (the lower the rate, the more competitive the school), Yale turns away all but the best and the brightest in each freshman class. Only Harvard, fourth in our rankings, is more selective, with a 6% admit rate. A five-to-one student-faculty ratio keeps the brainiacs engaged, and the 89% four-year graduation rate helps students enter the job market on time, avoiding an extra year of tuition.

Every year, readers question how an institution like Yale, which charges more than $50,000 a year, can possibly be a good value. The answer is simple: Sticker price does not equal net price. The average total cost of a private college or university is about $40,000 a year, but private institutions’ abundant need- and merit-based aid means that most families pay about half the advertised price. “The financial aid that’s provided by these national liberal arts colleges and private universities is extraordinarily generous,” says David Warren, president of the National Association of Independent Colleges and Universities.

Although most top-tier schools offer only need-based aid, a few (including Washington and Lee) award generous merit aid, too. Third-place Rice University gives an average of $12,068 in non-need-based aid to more than one-fourth of its students who don’t qualify for need-based aid. Vanderbilt (number 11) offers $24,788, on average, to almost 20% of such students. Further down the lists, you’ll see more liberal arts and private universities offering merit aid to entice high-achieving students onto their campuses.

Private four-year schools are pumping the brakes on tuition increases. This year, private institutions raised tuition by an average of 3.56%, according to the NAICU. That’s the lowest increase in four decades. “I think the Great Recession reset the whole understanding of affordability, access and price elasticity,” says Warren. “These colleges are absolutely determined to drive down their operating costs.”

Run your finger down the total cost column of our private university rankings and you’ll see price tags ranging from nearly $50,000 to more than $60,000. That is, until you reach Elon University, at number 22. The total cost is $40,946. Unlike many of the schools on our list, this private university in North Carolina uses a “low tuition, low discount” cost model. That means what you see in terms of sticker price is more or less what you get.

The reason? The school wants to entice students who are waffling between Elon and the top-notch public flagship universities in the region, such as the University of North Carolina at Chapel Hill (last year’s number-one public college in Kiplinger’s rankings), the University of Virginia (number two) and the University of Maryland (number five). Elon’s tuition competes with the out-of-state tuition charged by its rivals. “We’ve got costs at the very top of mind,” says President Leo Lambert.

But keeping prices low is a balancing act, and a lower sticker price is matched by less-generous financial aid. Right now, average need-based aid is $13,628 -- $10,000 to $20,000 lower than the aid packages offered by its private university peers. The net price is $27,318, matching the net price of private universities in our rankings. Lambert says that need-based aid will grow: Elon aims to double it by 2020. Meanwhile, the low sticker price appeals to families who don’t expect to qualify for aid.

Grinnell owes its bump to stronger academics. A 36% admissions rate blows last year’s 50% out of the water. Improved graduation and retentionrates, plus higher test scores among incoming freshmen, give it an extra lift. Carleton College boosted its graduation rates and lowered the averageamount of debt that students carry at graduation. Among private universities, Johns Hopkins (number 16) moved up seven places, thanks in part to higher graduation rates and a reduction in average undergraduate debt.

Our New Number One

Washington and Lee boosted the average amount of need-based aid by 7% compared with last year. Upping need-based financial aid is a goal,and the school seeks to increase it by $160 million. W&L is about $120 million into its fund-raising campaign. For senior Anton Reed, who was also considering the University of Pittsburgh, W&L’s financial aid package drew him to the school. “My financial aid was significantly better at Washington and Lee than at Pitt, even though Pitt is a less expensive school,” says Reed. And affordability extends beyond generous financial aid in a town where students pay only about $400 per month in rent.

But whether students get a break or pay the sticker price, President Ruscio says the college still delivers on value. “We want people here to think that this education is worth it, even for those who are paying the full freight.”