Buying a Car as a Christmas Gift. Really?

Automakers promote this holiday fantasy in ads, but sales actually pick up -- and deals can be better -- after December 25. 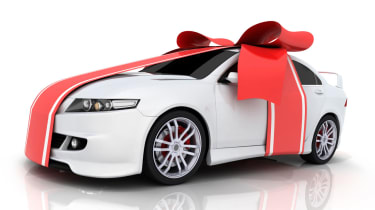 Maybe you’ve seen the ad: Santa Claus places a tiny box on a snow-covered driveway, then the box morphs into a shiny new Lexus with a big red bow on top. It's quite the vision.

But is there any reality to this holiday fantasy promoted by automakers? Are people actually giving cars as gifts? The answer, says Brian Smith, vice president of marketing at Lexus: It happens -- sometimes. While December isn’t usually the top month for car sales in general, it has claimed the No. 1 spot for sales of luxury cars for seven of the past 12 years, according to data from car-shopping Web site Edmunds.com.

So should you rush out to purchase a new vehicle ahead of Christmas? Not if you're looking for the best price. That's because you can probably score a better deal the week after Christmas.

In some cases, someone may already have decided to buy a new car near year's end and simply takes the opportunity to present it as a gift. But consumers usually buy cars in December for other reasons, Smith says. Leases coming to an end is one driving factor. Another is the availability of tempting year-end incentives. As the calendar draws to a close, dealers are trying to make as many last-minute sales as possible to meet or beat annual goals.

Thus the onslaught of sappy commercials. In reality, the weeks before Christmas are slow for sales of most vehicles, so manufacturers and dealers promote heavily in hopes of clearing out inventory before the end of the year to make room for new models, says Jessica Caldwell, a senior analyst for Edmunds.com. The ads are trying to get consumers in the buying spirit before the new year. Whether the sale comes before or after Christmas -- and whether or not the car is a gift -- is less important than the sale coming before January 1. Auto manufacturers spent about $1.7 billion on ads in November and December of 2013 -- $753 million of which was for holiday ad campaigns, according to marketing research firm Kantar Media.

The payoff from all of the holiday advertising seems to come right after Christmas, when sales pick up. People take advantage of time off around the holidays to go car shopping because they assume from all the ads they’ve seen that deals will be abundant, Caldwell says. The final days of this December are expected to be the busiest car-shopping period of the year, according to Edmunds.com. Sales are expected to be 78% higher the week between Christmas and New Year’s than the average week earlier in December. And of course, if the cars are being purchased during the final week of the year, then they wouldn't have appeared in driveways adorned with bows on Christmas morning.

Not that the image of a bow on a car isn't memorable. Higher-end brands including Lexus, BMW, Mercedes, Lincoln and Acura run all of those holiday-themed ads in December for a reason. But the reason is that the ads serve as a reminder that it’s the last chance of the year to get a deal on a new car, Caldwell says.

Regardless of whether you buy a car as a gift for yourself or for someone else, you will cut your costs by purchasing a 2014 model in 2014. You can save an average of 10% off the manufacturer's suggested retail price (MSRP) for a 2014 model-year vehicle thanks to year-end incentives and rebates, versus 6% off MSRP for 2015 model vehicles, according to Edmunds.com. To save even more, see our tips on how to haggle with a car dealer.