A Small-Business Success Story: Barking Up the Right Tree

For Amy Nichols, the path to entrepreneurship started with her dog. 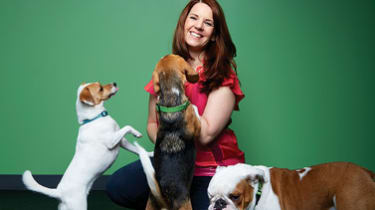 Amy Nichols created Dogtopia because she worked long hours and felt guilty about leaving Griffin, her Boston terrier, alone at home. Nichols, who was a sales representative for a telecommunications company, thought her dog needed socialization and exercise while she was away.

That was in 2000. Two years later, Nichols launched Dogtopia, a day-care and boarding center in Tysons Corner, Va., that features large playrooms designed for different types of dogs. Dogtopia also provides baths and other spa services for its canine clients.

By 2004, she had grossed $1 million; in 2005, she decided to sell Dogtopia franchises. She now owns five Dogtopia centers and has sold franchises for 22 others in 12 states. In addition to the $42,500 upfront franchise fee, she receives 7% of the franchisees’ revenues. Last year, revenue from all Dogtopia stores and franchises topped $14 million. In October, Nichols signed an agreement with Thomas Franchise Solutions to expand the company to more than 400 locations in the U.S. and Canada over the next seven years (for more on franchising, see Jump-Start Your Career With a Franchise).

Nichols says the investment has enabled her to hire more employees. She believes she can expand her operation in other ways as well. Nichols and her husband, Mike, who also works for Dogtopia, are building their dream house in northern Virginia and recently hired a nanny to help care for their two boys, ages 5 and 9, and twin girls born last November. They’re working with a financial planner to help them manage the additional income they’ll earn as the business expands. “I want to be smart about it,” Nichols says. “We have four kids to put through college.”

Nichols says she never doubted that she would succeed. “If you believe in yourself and your idea, it’s not that risky,” she says. “You’ll do whatever it takes to make it work.”

Small business owners are getting another crack at Paycheck Protection Program loans. Here are answers to some frequently asked questions about the lo…
8 Tips and Warnings on PPP Loan Forgiveness

Not having to pay back Paycheck Protection Program loans is a huge benefit for small-business owners. But there are a lot of rules that must be follow…
Check Your Financial Adviser Now (and Every Year) or Regret It Later

Fewer than 10% of investors use free background checks like Investor.gov, BrokerCheck or IAPD to check their financial advisers’ backgrounds. These on…
Tax Changes and Key Amounts for the 2020 Tax Year

Americans are facing a long list of tax changes for the 2020 tax year...and it's never too early to start thinking about next year's return.
Skip to ContentSkip to Footer