A Tough Assessment of JFK, Interrupted

What Kiplinger editors were planning to say about Kennedy…until word of his assassination came from Dallas. 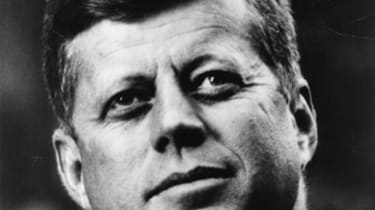 Friday, Nov. 22, 1963. A quiet day in the offices of The Kiplinger Washington Editors as final changes were made on the weekly edition of The Kiplinger Letter. The lead story that week was a sober assessment of the presidency of John F. Kennedy as his third year in office drew to a close. Then came the news: Shots fired at the presidential motorcade in Dallas, followed by an announcement that the president was dead.

The issue was pulled from the presses and a replacement was hurriedly written and mailed to subscribers. The original story, with a far different view than the misty-eyed memories and assessments being offered 50 years later, was never published. 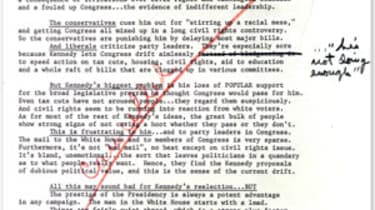 Less than a year until elections…how is Kennedy doing?

Kennedy’s political stock is probably at its lowest point…even lower than after the Bay of Pigs. Doubts about him are bipartisan, a consequence of irritations over civil rights and Washington scandals and a fouled up Congress…the evidence of indifferent leadership.

The conservatives cuss him out for “stirring up a racial mess,” and getting Congress all mixed up in a long civil rights controversy. So the conservatives are punishing him by delaying most major bills.

And liberals criticize party leaders. They’re especially sore because Kennedy lets Congress drift aimlessly…“he’s not doing enough” to speed action on tax cuts, housing, civil rights, aid to education and a whole raft of bills that are clogged up in various committees.

But Kennedy’s biggest problem is his loss of POPULAR support for the broad legislative program he thought Congress would pass for him. Even tax cuts have not aroused people…they regard them suspiciously. And civil rights seems to be running into reaction from white voters. As for most of the rest of Kennedy’s ideas, the great bulk of people show strong signs of not caring a hoot whether they pass or they don’t.

This is frustrating to him…and to party leaders in Congress. The mail to the White House and to members of Congress is very sparse. Furthermore, it’s not “mad mail,” no heat except on civil rights issue. It’s bland, unemotional…the sort that leaves politicians in a quandary as to what people really want. Hence, they find the Kennedy proposals of dubious political value, and this is the sense of the current drift.

All of this may sound bad for Kennedy’s reelection…BUT

The prestige of the presidency is always a potent advantage in any campaign. The man in the White House starts with a lead.

Things are fairly quiet abroad, which is a strong plus factor. Kennedy would be hurt only by an unexpected eruption of new trouble.

The economy is strong…rising…and will go on rising in ’64. Whatever doubts about this now will be dispelled by spring.

Any president in an era of good business has the upper hand, and Kennedy will take full advantage of this when his campaign begins. The old theme of “time for a change” seldom works when things are good.

Also the Republicans are split…between THEIR left and right. Already there are rumbles from the right that it will sit this one out unless Goldwater gets the nomination. And moderates are threatening a walkout if he does. Of course, this just makes it easier for Kennedy.

So Republicans are faced with an uphill fight next year.

The odds as of now still favor Kennedy for reelection.

The new page that rolled from Austin Kiplinger’s manual typewriter that day was quintessential Kiplinger, looking forward. Just a few opening lines about the fallen leader:

President Kennedy was a young man in the affairs of the world. He survived a war only to lose his life in time of peace. He showed courage in his job and gave his life in line of duty. But government must…and does…go on. The U.S. must move ahead and the world is watching.

The rest of the issue’s four pages answered those questions about Lyndon Johnson.