Upshot of the first debate: The battle between the pro-business wing and tea partyers is likely to drag on, to the delight of Democrats. 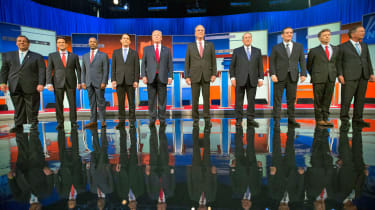 This much is crystal clear after the first presidential debate Thursday night: The 2016 presidential election will look a lot like the 2008 and 2012 races, especially during the primary season, but maybe in November as well.

Republicans will keep fighting each other, waging a fierce battle over the direction of the party, even if it dooms their chances of winning the White House next year.

On one side: the GOP’s pro-business wing. It wants to win badly, even if that outcome requires an easing of views on immigration, federal spending and other issues near and dear to the hearts of Republican voters, but less vital to independents. The need to reach independents can’t be overstated, since Democrats hold a big registration advantage over Republicans.

On the other side: conservative tea partyers. They’re much more interested in shaping the future makeup of the party than in winning in 2016. It’s early, and there’s a lot of ground to cover before the 45th president is chosen. But the tea partyers have a chance to prevail this time, much to the dismay of mainstream Republican leaders and key backers such as the Chamber of Commerce. And much to the delight of the Democratic Party, which has an eye on winning three straight presidential elections for the first time since Franklin Roosevelt and Harry Truman.

There’s no favorite for the nomination. Donald Trump tops early polls but he will fade. He seems unsuited for the long haul of the campaign, a view that his shoot-from-the-lip style in the first debate underscored. But he has bonded with disgruntled voters who are fed up with anything connected to Washington.

When Trump falters, expect his backers to transfer allegiance to a tea party darling. One option is Sen. Ted Cruz of Texas. Another is former Gov. Mike Huckabee of Arkansas, an evangelical with a strong base in Iowa and other states that will vote early in the primary process.

Don’t be surprised if pro-business-wing favorite Jeb Bush struggles for support. There is a lot of Bush fatigue in the wake of the presidencies of his father and his brother. On top of that, his softer views on illegal immigration and education are at odds with the positions taken by many others in the GOP.

Poised to benefit: Sen. Marco Rubio of Florida and Ohio Gov. John Kasich. Both laid out moderate views during the debate and seem certain to gain ground in upcoming polls. And maybe former tech executive Carly Fiorina. She’ll move into the top tier of contenders in the huge field after a strong performance in the undercard debate.

Despite the early, high-profile start to the campaign, including one of the most insightful debates in memory, the fight for the nomination won’t wrap up fast. The main reason is money. The ability of outside groups to raise campaign cash in virtually unlimited amounts gives nearly every candidate the kind of staying power previously reserved for Bush and others with access to the business wing’s deep pockets.

Having access to that kind of money will prompt more candidates to stay in the race longer than they would have in previous elections. With a crowded field — 16 men and one woman so far — it’s likely that the winners in some primaries and caucuses will wind up with less than 25% of the vote. So only a few hapless candidates will bail as the bid for convention delegates plays out, starting in Iowa and New Hampshire six months from now.

With such a big field, some candidates will be forced to take risks to try to make headway, including attacking the candidates who are ahead of them. That will give Democrats plenty of ammunition to use against the eventual nominee in the general election.

On the Democratic side, Hillary Clinton remains the favorite to become the nominee. But she is not nearly as invincible as she seemed just a few months back. Her favorability ratings are upside-down — higher unfavorable numbers than favorable. Look for those ratings to become even more lopsided as Republicans sharpen their attacks.

And just as there is Bush fatigue, there is Clinton fatigue, too, especially in Iowa and other states that vote early in the nominating process.

It wouldn’t be a huge shock if Clinton lost Iowa, and maybe even New Hampshire, to Sen. Bernie Sanders of Vermont, an independent running as a Democrat to the left of Clinton. But as a self-labeled socialist, Sanders doesn’t stand a chance of winning the Democratic nomination. Neither can former Maryland Gov. Martin O’Malley or the small number of other Democrats in the race. They’re just too obscure.

Rampant speculation aside, Vice President Joe Biden isn’t a good bet to run. But like a relief pitcher, he’ll stay loose in case Clinton stumbles during hearings on Benghazi or if there are damaging revelations about her State Department e-mails, or leftover fallout of some sort from Bill Clinton’s presidency.

The electoral map favors Democrats, but November 2016 is far down the road. Based on the current political climate, a Republican can win, but the climb will be steep.