Warren Buffett is a big fan of bank stocks. 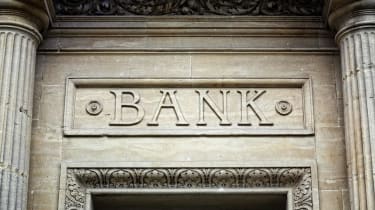 But how do you jump on the bank bandwagon if you're a small investors lacking Buffett's billions? One cost-effective approach is to focus on low-priced shares of smaller regional banks that can profit from the same tailwinds that are benefiting big banks. We found three promising regional bank stocks trading under $20 that look attractive.

But before you place a buy order, don't neglect to weigh the impact of trading commissions. Let's say you want to invest $100 in each of the three bank stocks we recommend. Even at just $4.95 per online trade, the going rate at brokerages such as Fidelity and Schwab, your investment would already be down 5%. For small trades, consider opening a free Robinhood account instead. You can use the brokerage's smartphone app to make no-commission stock trades. An upgrade to the premium service, which gives investors access to after-hours trading and margin accounts, starts at $10 a month.

Data is as of May 2, 2017, unless otherwise indicated. Click on ticker-symbol links for current share prices and more.

(Stocks are listed in alphabetical order. Analyst ratings are per Zacks and Thomson Reuters.)

Huntington Bancshares is a regional bank based in Columbus, Ohio. A recent merger with FirstMerit Bank expanded operations to Michigan, Wisconsin and Indianapolis. That expansion across the Rust Belt could prove to be beneficial if the White House gets its way on trade protectionism, corporate tax cuts and support for the coal industry.

Cost saving from the acquisition could also help Huntington get a grip on its expenses. The bank missed analysts' average earnings forecast for the first quarter because of higher costs. Investors should be reasonably confident that it will. The company is projected to produce per-share profit growth of 8.5% this year and 15% next year, according to Zacks.

Of the 15 analysts covering the stock, seven say it's a strong buy, one rates it at buy, and seven call it a hold. A recent upgrade to Buy from Hold at Jefferies could be the first of many if Huntington can bounce back with a better second-quarter showing.

The earnings report won't come out until this summer, however. In the meantime, investors will have to make due with a dividend yield of 2.3%, based on the last four quarterly dividend payments. That's more than competitive with the regional bank average, which stood at just 1.63% at the beginning of 2017.

KeyCorp, the Cleveland-based regional bank, is starting 2017 on the right foot by delivering better-than-expected revenue and earnings for the first quarter. The happy surprise was due to cost savings from its 2016 acquisition of First Niagara Bank and lower losses on credit.

Analysts at Wedbush said KeyCorp is "firing on all cylinders" and has a lot of momentum going forward. "The first quarter tends to be seasonally the weakest and momentum usually builds throughout the year," Wedbush notes. "Additionally, the First Niagara acquisition is performing better than expected."

Wedbush rates shares at outperform with a $22 price target. That gives the stock implied upside of 18% over the next year or so. The wider research community is split, but it also sees solid gains ahead. Six analysts say KeyCorp is a strong buy, one rates it at buy and nine call it a hold, according to Zacks. However, their average target price of $20 still calls for price appreciation of 9% over the next 12 months.

In another positive for the bank, rising interest rates will ease pressure on its profit margins, analysts note. The improved outlook for banks and the fruits of the First Niagara acquisition look to make shares a winner this year.

United Community Financial Corp. is the holding company for the Home Savings and Loan Company of Youngstown, Ohio. It's a small bank, but it's getting big praise from the analyst community. Boenning & Scattergood says its transformation into a "formidable" commercial banking operation is "nothing short of impressive." B&S rates the stock at outperform, and it's not alone. The three analysts tracked by Thomson Reuters all say it's a buy.

The bank has been active in the mergers and acquisitions markets, which could spur a big jump in operating profits, B&S says. Companies often need to bolster their funding when interest rates are moving up.

Shares in United Community Financial appear to be taking a breather after a strong 2016. The stock gained more than 50% last year and is currently down about 3% year-to-date. The pause shouldn't last long, if analysts are correct. Indeed, they're looking for the stock to rise 16% in the next 12 months.

Bonds can be more complex than stocks, but it's not hard to become a knowledgeable fixed-income investor.
Kiplinger’s Best Firms for Customer Service: Banks, Credit Cards and More

We crunched a lot of numbers (and ran a survey) to crown top firms for their service on banking, credit cards, mortgages, and home and auto insurance.…
The Best Vanguard Funds for 401(k) Retirement Savers