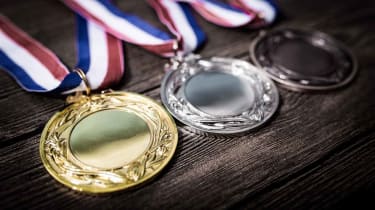 It’s no secret that index funds rule. In the 15-year period that ended in December 2016, 92% of actively managed large-company stock funds lagged Standard & Poor’s 500-stock index. But do any funds beat the index? As a matter of fact, some do.

To find large-company stock funds that have done the best job of beating the S&P 500, we picked apart the returns of some winning funds, analyzing calendar-year returns, annualized returns over the past one-, five- and 10-year periods and rolling 12-month returns over the past 10 years, which track successive 12-month periods starting anew each month.

We concede, these funds lagged the S&P 500 during some stretches over the past decade. But our favorites outpace the index on a one-year, three-year, five-year and 10-year annualized return basis. And perhaps more important, they were the most consistent, too, outperforming the benchmark in more than 70% of the rolling-return periods we scrutinized.

Data is as of July 3, 2017. Click on symbol links in each slide for current share prices and more.

Kalra must invest most of Blue Chip’s assets in companies that are members of the S&P 500 or the Dow Jones industrial average, or firms that have a market value of at least $1 billion if they are not in either of those indexes. On top of that is a growth requirement: Kalra seeks firms with expected long-term earnings growth of at least 10% a year.

Before taking over at Blue Chip Growth, Kalra ran the tech-heavy Fidelity OTC Portfolio (FOCPX)—more on that fund later—and before that, Fidelity Select Computers. So, it’s no surprise that tech stocks make up 40% of the fund’s holdings, which is more than the 32% weighting of information technology stocks in the S&P 500 (it’s also heftier than the 29% weighting in the average large-company growth fund). Apple (AAPL), Alphabet (GOOGL) and Amazon.com (AMZN) are among the fund’s biggest holdings.

Since Kalra took over the fund, his annualized return of 17.6% beats the S&P 500 by an average of 2.6 percentage points per year.

When Sonu Kalra took over at Fidelity Blue Chip Growth, he handed the reins of Fidelity OTC Portfolio to manager Gavin Baker. Baker’s record at OTC since taking over in July 2009 (80% of the 10-year period we examined) is a stunning 19.0% annualized. That beats the 15.2% return in the S&P 500 over the same period by an average of 3.7 percentage points per year. Wow. To be fair, the fund’s mandate is to beat the Nasdaq Composite index. OTC beats that index, too, albeit by a slimmer margin, but still by an average of 1.5 percentage points per year since July 2009.

The Nasdaq is a tech-heavy index, so it should come as no surprise that OTC has more exposure to tech stocks (55% of the fund’s assets) than other large-company growth funds (29%) and the S&P 500 (32%). OTC also has a larger proportion of its assets (more than 30%) in small and midsize companies than its peers. The combination can mean a bumpy ride: Over the past decade, for instance, OTC has been about 24% more jumpy than the typical large-company growth fund. Tesla (TSLA), Apple and Alphabet are among its biggest holdings.

Manager Jerome Dodson is a pioneer in socially responsible investing. He founded the fund firm Parnassus in 1984, believing that stocks of companies that fit the SRI bill—those that weren’t involved in alcohol, gambling, tobacco or the like and were mindful of the environment and their employees—would beat the market. That approach has evolved over time and now wraps in environmental, social and corporate governance values (dubbed ESG for short).

Endeavor, a large-company growth fund, is what Parnassus views as its “super ESG” fund. In addition to excluding the usual suspects, Dodson also eliminates firms involved with fossil fuels. Plus, Endeavor gives extra credit to companies with good work environments. The thinking is that happy employees will help drive corporate success.

If past performance is any guide, there must be some truth to his thinking. Dodson, who has run the fund since it opened in 2005, has the winningest rolling-return record over the past 10 years of all the large-company funds we examined. His record since the fund launched beats the S&P 500 by an average of 3.9 percentage points per year. Put another way, a $10,000 investment in the fund on its opening day would be worth almost $42,000 today, 54% more than a comparable investment in an S&P 500-index fund. Biotech firm Gilead Sciences (GILD), drug and medical supply company McKesson (MCK) and Qualcomm (QCOM), best known for its semiconductor chips that power smartphones, are among the fund’s top holdings.

It’s not an immediate threat, but some warning signs say to set up some defenses now.