You've probably heard the stock market referred to as a roller-coaster ride.

You've probably heard the stock market referred to as a roller-coaster ride. But what do you do when stocks fall into a correction – a steep, stomach-twisting decline of at least 10% from a peak?

The current stock market correction, which began Feb. 19, is particularly turbulent. U.S. markets have quickly gone from setting a series of record highs to a volatile churn in which stocks are conceding huge chunks almost every other day.

On March 9, for instance, the S&P 500 dropped 7% at the open as the coronavirus outbreak spread, oil markets looked primed for a price war and bond yields continued to fall to record lows. That fall was deep enough to trigger market circuit breakers that stop trading for 15 minutes, and the index closed more than 7% lower.

It's easy for investors to get scared when facing any sort of market downturn. That said, market corrections happen more than you might think. Here, we look at eight things you should know about stock market corrections to better help you deal with the current one.

There Are Multiple Types of Declines

When you're watching red numbers flash on your computer screen, it might not matter what the financial whizzes are calling a selloff. But there are actually multiple types of market downturns that investors have decided to give name to, based on how far stocks have fallen from their recent highs.

Whether this correction turns into a full-blown bear market remains to be seen. Historically speaking, bear markets are relatively infrequent – the most recent was in 2009 and preceded a prolonged ruin that became the longest bull market on record. Since 1926, there have been only eight bear markets. The worst, which came during the Great Depression, saw stocks drop by more than 83%, says David Reyes, a financial advisor and chief financial architect at Reyes Financial Architecture in San Diego.

Pullbacks and Corrections Are Common 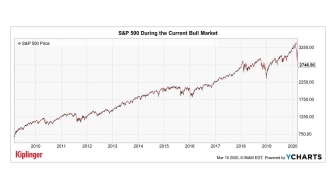 During the 2009-20 bull market, the S&P 500 has seen 13 pullbacks and eight full-fledged corrections, says Michael Sheldon, executive director and CIO of RDM Financial Group at Hightower, located in Connecticut.

Before the COVID-19 coronavirus-induced correction in February, the most recent correction came during the fourth quarter of 2018, when the market nearly fell into bear territory as interest rates rose and trade war tensions escalated.

Other triggers of corrections in the past decade include an economic slowdown in China in 2011, the downgrading of the U.S. credit rating in 2011, rising oil prices, the devalued yuan, Brexit and fears that Greece would leave the European Union.

"Pullbacks and corrections are a normal part of investing," Shelton says.

If you've ever dieted, you know it's a lot easier to put on the weight than it is to take it back off again. The stock market kind of works in the same way: Economic growth and expansion take a long time, but if you slip into a correction (or even a bear market), buckle up.

"Corrections are vicious and they are fast," says Anthony Denier, CEO of Webull Financial, a commission-free trading platform with more than 11 million users. "They catch everyone off guard – just a couple of days before the markets dropped 1,000 points, everyone is on CNBC cheering all-time highs."

Part of that is a result of stop-loss orders that automatically trigger trades if a stock falls below a certain level. And part of it is a little bit of greed: When the market is at historic highs, it's only natural for some investors to take any sign of weakness as a sign to take their profits, Denier says.

"All of a sudden, it becomes its own beast and starts feeding itself."

"You can see new highs every day in a bull market, but it's like the old cha-cha: one step forward, two steps back," Denier says. "A selloff is always much more vicious and much faster than a rally."

Corrections Often Are Driven by Fear and Speculation

When you look at stock market corrections over the last decade, not many are purely organic in nature. Corrections don't often happen because an indicator such as interest rates or currency valuation gets out of whack.

It's much more common for a correction to happen because investors are trying to predict future events and hedge their bets against what might happen, rather than looking at what is currently going on.

"A lot of it is fear of the unknown," says Dwain Phelps, founder and CEO of Phelps Financial Group in Kennesaw, Georgia. "I always talk about two emotions in investing: fear and greed. Depending on the situation, one of those emotions will always be prevalent. (In February), fear was prevalent, and we had pullbacks and it led to a correction.

Indeed, much of the current pullback has come amid a nominally low case count of coronavirus in the U.S. That's because investors are acting out of anticipation of what they've already seen in other countries, which is case counts and deaths increasing, and economic activity being disrupted.

A Selloff Can Be "Healthy"

Much as broccoli, Brussels sprouts and carrots are good for your diet, sometimes a dose of market reality in the form of a correction can end up being beneficial in the long term.

After all, nobody can survive forever living on a sugar high. The same goes for a stock market that is artificially propped up through accounting tricks, Phelps says.

"In my opinion, I think corrections are needed at times in the market. I do feel there are in particular times stocks that are overvalued, so having a healthy correction that brings value to the market would be beneficial to investors."

As an example of a "healthy" correction, Phelps points to the presidency of George W. Bush and the quantitative easing policies that drove the market.

"We were printing money and we were dropping interest rates, and what we did from the economic standpoint was that instead of allowing things to organically materialize, we were kind of producing it ourselves," he says. "Stock prices would go up because things appear that they are operating organically, but they are not. It's kind of being manufactured."

Corrections Are an Opportunity to Buy Stocks at a Discount

Investors with a long time horizon can and should view corrections (and even bear markets) as an opportunity. These drawdowns in price are a perfect time to look at stocks with fundamental strengths that are suddenly available at a discounted price.

For instance, Apple (AAPL) shares dropped by nearly 19% between Feb. 11 and March 9, from about $327 to $266 per share. Investors who maintained some cash reserves and still believed in Apple's long-term prospects had a golden opportunity to grab their stock at significantly lower prices than before.

"The longtime investors are understanding that it goes with the territory," Phelps says. "They are looking to take advantage of things that are on sale. Your inexperienced investor who has only been in the market for a couple of years, they are the ones that you have to kind of talk to and walk them through what's going on."

Just remember that investing is far more than price. You don't just want something cheap – you want value.

Market Corrections Are Challenging for Retirees, However

What happens when you don't have a long time horizon?

If you are retired or nearing retirement, it can be downright scary to see your 401(k) balance take a significant hit when your earning years are behind you.

"The most challenging time for baby boomers is as they get close to retirement or if they're just starting retirement, and the uncertainty that comes with the drawing down of their accumulated wealth that they've accumulated over time," Sheldon says.

Making things a little more difficult is that bond yields are at historic lows, and life expectancies continue to grow. So while bonds have certainly helped offer protection throughout the downturn so far, some retirees might need to keep a significant portion of their portfolio in equities – perhaps going even more aggressive than the classic 60/40 (60% stocks, 40% bonds) allocation that portfolio managers have traditionally suggested.

"Volatility at that time can be more challenging and make someone question if they should continue to have the asset allocation they have," Sheldon says.

A Financial Plan Helps in a Stock Market Correction

As with many things, having a plan for dealing with market declines is the best way to navigate troubled times rather than making spur-of-the-moment decisions that are off the cuff.

You can put your portfolio through a series of stress tests, calculating how it would respond to various market scenarios, and make sure that your risk tolerance is in line with your objectives.

"One of the things we always do when a client comes in is we create a financial plan," Sheldon says. "Based on that plan, we can figure out the correct asset allocation and the appropriate risk/reward that the client should have to meet their long-term investment goals.

"One of the important things about the financial plan is that it sets an allocation so the client can ride out the ups and downs that come with investing," he says. "The most difficult thing for investors is to experience or pullback or correction the market that can lead to an impulsive reaction to sell stocks or raise cash at inappropriate times, which can affect long-term performance."