4 Best ETFs to Invest in the Dow

Take a look at these four good, low-cost ETFs to invest in the Dow.

Over the last 25 years, the Dow Jones industrial average has returned an average 10.3% per year, 0.8 percentage point per year better than Standard & Poor’s 500-stock index. On a $10,000 investment, that amounts to a difference of nearly $20,000. Recent performance has helped boost that number. Over the past year, while bargain-priced stocks outperformed faster-growing names, the value- and quality-oriented Dow returned 20.2%, compared with 17.4% for the S&P 500’s more blended approach.

And because the Dow focuses on cash-rich industry titans, says Alex Bryan, head of research for passive strategies at Morningstar, it can hold up better during down markets. From October 2007 through March 2009, for example, the Dow lost a cumulative 51.8%, compared with a 55.3% slide for the S&P. The highly profitable firms on the Dow’s roster also boast a higher dividend yield than those in the S&P: 2.4% on average, compared with 2.0%.

Take a look at these four good, low-cost ETFs to invest in the Dow.

Data is as of March 29, 2017. Three- and five-year returns are annualized. Click on symbol links in each slide for current share prices and more.

The most straightforward way to invest in the Dow is to, well, invest in the Dow. SPDR Dow Jones Industrial Average ETF holds all 30 stocks in the average and has tracked its performance accurately since the fund began in 1998. Like the index it tracks, the exchange-traded fund devotes 88% of assets to giant-size firms (those with more than $89 billion in assets), compared with 40% for the average large-company stock fund. Firms with the highest stock prices take the top spots in the portfolio, with Goldman Sachs (GS), 3M (MMM) and Boeing (BA) recently leading the way.

The fund seeks to track the performance of the Dow, not beat it, but lately that’s been good enough to beat broader, better-diversified market barometers. In addition to beating the S&P 500, the fund’s 20.0% one-year return clobbered the performances of the Wilshire 5000 Total Market index (18.5%) and the Russell 1000 stock index (17.6%).

This ETF tracks the Dow Jones Industrial Average Yield-Weighted index, which comprises Dow stocks that have paid dividends over the past four quarters. Currently, that’s all 30 of them. But even mixing the same ingredients, the Guggenheim Dow Jones Industrial Average Dividend ETF has a slightly different flavor than a straightforward Dow index fund.

That’s because rather than weighting holdings by price, the underlying index ranks them by dividend yield. The reshuffled portfolio yields 2.6%, compared with 2.2% for the SPDR Dow Jones Industrial Average ETF, and features bigger stakes in the technology and consumer staples sectors, with a smaller chunk dedicated to financial services firms. Verizon Communications (VZ), Pfizer (PFE) and Chevron (CVX) headline the fund, which launched in late 2015. Since its debut, the ETF has trailed the SPDR fund by less than a percentage point per year, on average. It charges expenses of 0.30% of assets.

This exchange-traded note (ETN) seeks to replicate the time-honored “Dogs of the Dow” strategy. Each year, the fund invests equally in the 10 Dow stocks with the highest dividend yields. The highest yielders, the thinking goes, are still excellent companies that have temporarily fallen out of favor. The goal is to reap a year’s worth of gains as the stocks return to form. Then rebalance, rinse, repeat.

The Elements ETN seeks to make this simple strategy even simpler by doing the rebalancing for you and reinvesting the dividends. But there are a few complicating factors for investors to consider. For one thing, while ETNs mimic indexes like ETFs, they do so without actually owning the underlying stocks. Rather, an ETN is an unsecured debt – a promise to pay the investor the index’s return, minus fees. This means an investor could theoretically lose money if the issuer (in this case, Deutsche Bank) defaulted. Furthermore, Deutsche Bank suspended issuances of the note at the beginning of 2016. As a result, the ETN resembles a closed-end fund, with the fixed number of shares tending to trade above or below the actual value of the underlying stocks in the index. The shares currently trade 2.4% above the value of the underlying stocks. Add in a 0.75% expense ratio and this investment looks pricey.

But investors who have owned the ETN over the past five years aren’t complaining. Over that time, they’ve enjoyed a 14.8% annualized return, coming in 2.5 percentage points a year ahead of the Dow.

If you like the Dow for its dividend-paying potential, consider Schwab U.S. Dividend Equity. A member of the Kiplinger ETF 20, the fund holds 100 large, high-quality stocks that have paid dividends for at least the past 10 years. The ETF tracks the Dow Jones U.S. Dividend 100 Index, which also screens stocks for quality factors, such as dividend yield, dividend growth rate and return on equity (a measure of profitability). Given the fund’s skew toward blue-chippers, Dow investors should not be surprised to find some familiar faces among the top holdings. In fact, going down the list, it takes until the eighth-largest holding to find a non-DJIA stock. All told, stocks in the Dow make up 56% of Dividend Equity’s portfolio.

The fund has lagged lately, returning 14.6% over the past year, compared with 20.2% for the Dow. But at 3.0%, the fund’s yield trounces the Dow’s 2.4%. And the price you pay for what Morningstar calls one of the highest-quality dividend-paying ETFs on the market is a dirt-cheap 0.07% of assets. 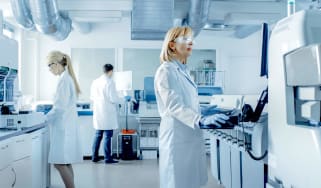 If Joe Biden emerges from the Nov. 3 election victorious, these 10 picks could be some of the best stocks to own under the new administration.
Kip ETF 20: The Best Cheap ETFs

If you want a long and fulfilling retirement, you need more than money. Here are the most valuable retirement assets to have (besides money), and how …
Skip to ContentSkip to Footer