8 Robots That WillChange Your Life

Scores of new robots are in the works.

Scores of new robots are in the works. Many of them hold great promise of improving productivity in offices, in factories and on farms. Here are eight examples already on the market, or headed to commercial production in the next few years. The slideshow begins by clicking the navigation bar to your right.

Sales of industrial robots will grow from less than $1 billion this year to about $3 billion a year by 2015. Sales of domestic robots -- robotic floor cleaners and the like -- will climb to $5 billion by mid-decade, about five times the mark hit last year. The largest user of robots, however, will continue to be the military as it seeks to have machines, rather than humans, face lethal risks. 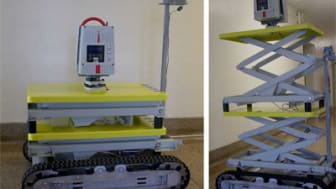 Not enough chicken wings to go around for lovers of buffalo wings? No problem, say Georgia Tech developers of a robotic process that cuts the chicken scapula bone and surrounding meat to yield more wing pieces per bird. The sensor based boning system could spell more profits for chicken processors.

Vision, Even in Dangerous Darkness

Emergency responders and soldiers will be better able to assess perilous situations from afar using this robot, developed by the Missouri University of Science and Technology and the University of Missouri-Columbia.

The remote controlled device is equipped with an infrared camera, light detection and ranging technology and can send detailed 3-D images wirelessly to a computer. The prototype, pictured here, will give way soon to a smaller, lighter and more flexible version.

Making robots look more like people has long been a focus of Japan’s burgeoning robotic industry. At the cutting edge of this trend is Geminoid F (for female), from researchers at Osaka University. The bot can also make different facial expressions, mimic subtle human mannerisms and respond to questions.

Developers envision the robots to someday work at answering questions in locations such as museums. Cost, at least initially, is $110,000 a copy.

Busy at the Lab

Toshiba is working on improving quality control and efficiency in the pharmaceutical industry with robots that can proofread labels, lift heavy items and perform other tasks. Three of its models, including this TH250, can enter clean rooms without having to stop and don protective gear needed by humans.

A number of researchers are working on robotic innovations that can help the infirm, elderly and others in physical rehabilitation increase arm and leg strength. One such device is the robot suit HAL (hybrid assistive limb) seen here being tested on the streets of Tokyo.

A team at Tokyo University is also working on the Power Assist Suit, a full body device that helps people lift heavy objects with much less physical exertion, decreasing the possibility of back and other injuries.

Robotic couriers have been schlepping parts, books and whatnot around factory floors, hospitals and other places for years — usually following guides embedded in the floor.

New robots like the SpeciMinder, developed by Swisslog Healthcare Solutions and CCS Robotics, go farther by navigating congested hallways and doors autonomously. They’ll even ask for help with a voice signal if something is blocking their path.

Hotels, restaurants, and kids just plain tired of having to help mom or dad with orderly chores may someday find a dexterous bot like this handy to have around. Remember the Jetsons' "Alice?"?

Researchers at UC Berkeley taught this robot to identify nonrigid items such as towels and conform them into predictable and known shapes. Are shirts, sweaters, and napkins next?

Yes, Nurse, Right Behind You

The MT490 – a mobile workstation - was designed to follow and assist workers primarily in the health care sector. It can carry up to 50 lbs. in weight, take inventory, access data and check for hazards in patient areas.

The just-released MT490, from MobileRobots, can be called from a smart phone, follow a worker or be sent on a task from its touch screen.