Two months after Tesla's much-hyped inclusion in the S&P 500 failed to materialize, the index quietly added the EV maker to its ranks.

From the Department of What Took Them So Long, we learned late Monday that Tesla (TSLA, $408.09) will be added to the S&P 500 Index in December.

And it's going to be a lot for the market to swallow.

With a market value of more than $400 billion, Tesla is going to roil trading in index funds, as billions of dollars are reallocated to reflect the electric vehicle and storage maker's weight in the index.

Funds indexed to the S&P 500 will have to sell about $151 billion in shares in other S&P 500 companies and use those funds to buy TSLA stock. When the inclusion is settled, Tesla will account for about 1% of the S&P 500 and be among the top 10 most influential stocks in the market-cap weighted broad market index. 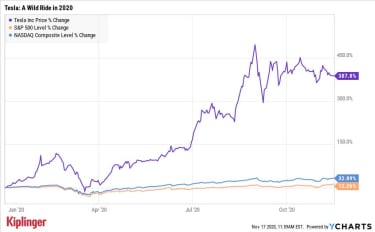 To that end, Standard & Poor's has said it is weighing conducting Tesla's inclusion in two tranches to help the market digest the enormous move.

TSLA stock would join the S&P 500 prior to the opening of trading on Dec. 21, S&P Dow Jones Indices says.

Investors have been anticipating the Tesla index news for a while. It felt like only a matter of time before TSLA was added to the most widely used benchmark of U.S. equity performance. In fact, investors were surprised that Tesla wasn't tapped for inclusion in September after it met the requirement of posting four consecutive quarters of profit.

That made Monday's announcement something of a small surprise, albeit a welcome one.

TSLA stock naturally rallied on the news as investors anticipated a rush of demand from funds, given $11.2 trillion indexed or benchmarked to the S&P 500. Shares popped more than 12% at Tuesday's opening bell.

The stock has been notoriously volatile over the years. Most recently, shares tanked by about 34% during the first week of September, shortly after the stock peaked following its 5-for-1 stock split.

But with TSLA stock up about 388% for the year-to-date, not even counting Tuesday's post-inclusion bump, no one's complaining.

Tesla founder and CEO Elon Musk's personal net worth jumped by more than $7 billion on the news to $98 billion, according to Forbes. He now lags only Amazon.com (AMZN) CEO Jeff Bezos, LVMH (LVMUY) CEO Bernard Arnault, Microsoft (MSFT) co-founder Bill Gates and Facebook (FB) CEO Mark Zuckerberg for the title of richest person in the world.