Facebook (FB), which surged Thursday on the launch of a feature to compete with TikTok, joined with other mega-caps to lead the indices higher yet again.

The major indices closed higher for a fifth consecutive day on Thursday. However, it was a "lumpy" performance that saw the "FAAMNGs" – or FAANGs, or FANGs, depending on which tech-related mega-cap stocks you're referring to – do most of the pushing, while broad swaths of the market failed to join in.

"The improvement in claims is a welcome relief after weeks of stalling at elevated levels, and suggests a moderation in the rate of job separations," writes Pooja Sriram, vice president, U.S. economist, at Barclays. "That said, with initial claims still above a million, there is a long way to go for labor markets to normalize to pre-COVID levels.

Meanwhile, federal stimulus negotiations remained stalled Thursday, leaving little hope that a deal will be hammered out before the weekend.

Investors have been fleeing to traditional safe havens over the past few months.

For instance, gold prices have been on the rise since the March bottom, including another 1% gain today to notch another record settlement at $2,069.40 per ounce – helped in part by a strong dollar. That has in turn driven up several gold ETFs, which analysts believe could head higher still as price targets on the yellow metal rise.

"With gold testing new highs around $2000 again today, the precious metal is pushing into some overbought territory on a short-term basis," writes Dan Wantrobski, technical strategist and associate director of research at Janney. "However, the long-term charts remain bullish at this stage, and we expect gold to outperform U.S. equities on a relative basis in the months ahead, even if we see some profit-taking / consolidation over the short-run.

"We are looking for a longer-term measured move toward the low-$3000 range for gold prices and would recommend investors consider having some exposure to the commodity."

Also, Treasury yields are now back near record lows as investors have started to pile into fixed income (remember: as prices go up, yields go down). Continued safety-seeking could mean higher prices on these 12 bond funds.

But what about the FAAMNGs?

While the surge in these mega-cap tech, communications and consumer plays might resemble the dot-com bubble, these stocks are increasingly looking like a new hideout for savvy investors. After all, these tech stocks have what many didn't in 1999-2000: extremely profitable businesses. Stocks such as Apple and Microsoft are cash-flow machines with billions upon billions of dollars in the bank, providing business options and a backstop most other companies simply can't match.

So as you look around for a little shelter, also consider equities with robust balance sheets and economic resilience – especially those that have businesses built to better withstand the continuing pandemic. 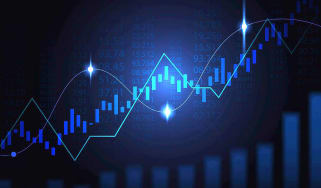 The technology sector took off again on a news-light Tuesday, though Apple (AAPL) didn't contribute much after a set of product and service reveals.
Skip to ContentSkip to Footer