“The market” has many proxies, but there are important differences among them.

Are you there God? It's me, Margaret.

How’s the stock market doing? Whether you track the market from the opening bell to the close or you get most of your financial news a day late, for any given weekday you’re likely to see three measures of the market from three market barometers: the Dow Jones industrial average, the Nasdaq Composite index and the S&P 500. For long periods, they tend to provide a similar sense of where things are headed: Over the past 15 years, the Dow had a 97% correlation (a measure of how similarly assets move) with the S&P, meaning that the two indexes tended to rise and fall in lock step. The Nasdaq’s correlation to the S&P: 95%. 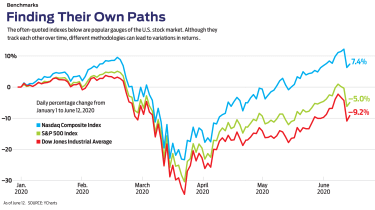 But lately, the market’s three most prominent yardsticks have been giving vastly different answers to investors’ fundamental question. In a wildly up-and-down year for stocks, the S&P 500 has lost 5.0% in 2020. The Dow has surrendered 9.2%. But the Nasdaq recently recorded an all-time high, and has returned 7.4% on the year. (Returns and other data are as of June 12.)

For investors to gauge how the stock market is behaving, it’s essential to understand the index they’re tracking, says Ben Johnson, director of exchange-traded fund research at Morningstar. “Each index is a unique snowflake. They come with different origins, universes of stocks and weightings. Some are rigidly rules-based with trans­parently quantitative criteria, and in other cases there’s a bit more subjectivity,” he says.

This becomes especially important if you’re investing in an ETF or mutual fund that tracks an index—investments that now claim more investor dollars than actively managed funds. “If you’re considering an index fund, you should do just as much due diligence on the index construction as you would to assess an active manager,” Johnson says. Here’s a look under the hood of three of the most widely quoted market measures.

Dow Jones industrial average. The granddaddy of all indexes, the Dow debuted in 1896 and still carries some old-school features. The index holds only 30 stocks, and factors such as company reputation and investor interest count significantly in selecting them (in contrast to the predominantly quantitative criteria that govern inclusion for other indexes). The Dow has larger allocations to industrial, financial and energy sectors than the other two indexes, which helps explains its subpar performance so far in 2020. Boeing, among the top 10 names in the index, has shed 41.5% this year.

Instead of weighting stocks by market capitalization (stock price times shares outstanding), the Dow weights constituents by share price, allocating more assets to higher-priced names, regardless of the number of shares outstanding. That has led the index keepers at S&P Dow Jones Indices and the Wall Street Journal to shy away from including stocks with ultra-high share prices, such as Alphabet and Amazon.com—prominent members of other indexes that have recently helped propel returns. Given the small number of stocks in the index, a high-priced name can have a disproportionate effect on performance.

But the Dow still has its fans, and for good reason. Over the past 15 years, the index’s 8.9% annualized return edges the S&P 500. The Dow’s blue-chip stocks held up better than the S&P and the Nasdaq during the 2007–09 bear market, and the Dow sports a 2.4% dividend yield—the highest of the three indexes.

Nasdaq Composite. This well-populated index tracks about 2,700 stocks that trade exclusively on the Nasdaq exchange, the first fully electronic stock exchange. The benchmark tilts toward fast-growing businesses—particularly tech stocks (currently 40% of the index), but also communications, consumer and biotech names—which has fueled the push to new highs. The index is market-cap-weighted, which means widely held, high-priced shares dominate, making it top-heavy with tech behemoths. The Nasdaq’s top five stocks—Microsoft, Apple, Amazon.com, Facebook and Alphabet—represent 39% of the index.

Over the past 15 years, the Nasdaq, although highly correlated with the other headline indexes, has returned an annualized 11.9%, more than three percentage points more than the Dow and S&P 500. Of course, when tech flames out, so does the Nasdaq. During the 2000–02 bear market following the dot-com bubble, the price of the index sank by 78%, compared with 49% for the S&P and 34% for the Dow.

Fidelity offers two funds that replicate the Nasdaq: Fidelity Nasdaq Composite Index Fund (FNCMX), which charges 0.36% of assets in expenses, and Fidelity Nasdaq Composite Index Tracking Stock (ONEQ, $374), an ETF with an expense ratio of 0.21%. Investors looking for a more concentrated play on big tech might like Invesco QQQ Trust (QQQ, $236). The ETF mirrors the Nasdaq-100 index, which includes the 100 largest non-financial stocks in the composite index by market cap.

S&P 500. Actually composed of 505 of the largest U.S. stocks by market cap, the S&P 500 is meant to provide a “true barometer of the U.S. economy and equity market,” says Aye Soe, of S&P Dow Jones Indices. The index covers 80% of the U.S. stock market by capitalization. Though it sports the same top five holdings as the Nasdaq, they make up a more modest 21% of the S&P’s assets. Still, at 23% of the index, tech is the best-represented sector. “The history of the index shows us that it reflects the point in U.S. economic history we’re in. Big tech has seeped into the way we live our lives, and the index reflects that,” says Soe.

Because of its more diversified approach to tracking the U.S. stock market and relatively transparent methodology, the S&P 500 is widely used as a bogey for mutual funds, and it is Kiplinger’s preferred proxy for the broad U.S. stock market. Several funds and ETFs replicate the index. Our favorite: iShares S&P 500 Index (IVV, $304), a member of the Kiplinger ETF 20 (our favorite ETFs), which charges just 0.04% in expenses. For a less top-heavy version of the index, consider Invesco S&P 500 Equal Weight ETF (RSP, $102), which, as the name implies, tracks a version of the S&P that assigns equal weighting to all 505 stocks, from Apple to Zoetis. The fund, which has outpaced the S&P since the market bottomed in March, has an expense ratio of 0.20%.

The whole ball of wax. For the most neutral representation of the entire U.S. stock market, Morningstar’s Johnson recommends investing in a fund that tracks a total-market index, such as the S&P 1500 or the Russell 3000. The Wilshire 5000 Total Market index has long been considered a broad-market benchmark, though it has shrunk to fewer than 3,500 stocks over the years. Vanguard Total Stock Market ETF (VTI, $154) tracks the CRSP Total Stock Market index, a market-cap-weighted index that folds in large-, midsize- and small-company stocks. One of the ETF 20, it charges 0.03% in expenses.