Estate Taxes Could Hit the Not-So-Wealthy

Democratic candidates are talking about raising the death tax to fund their proposed initiatives. 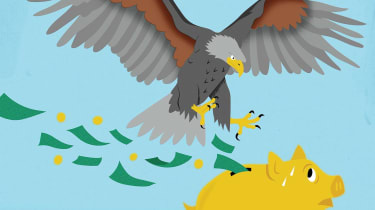 Democratic presidential candidates Elizabeth Warren and Bernie Sanders have unveiled ambitious plans to fund universal health care and other programs by hiking taxes on the wealthiest Americans. But lurking beneath proposed tax hikes on the super rich are measures that could affect a broader swath of taxpayers.

Both Warren and Sanders want to lower the amount of assets exempt from federal estate taxes—$11.58 million per person in 2020—to $3.5 million. Sanders has also proposed increasing the estate tax rate, which now tops out at 40%, to 45% to 77%, depending on the size of the estate.

If either candidate is elected president, “there will be a pretty strong push to increase estate taxes by raising rates or lowering exemptions or both,” says Howard Gleckman, senior fellow at the Urban-Brookings Tax Policy Center.

Democratic presidential candidates have also expressed an interest in narrowing or eliminating a provision in the tax code that benefits heirs who inherit assets that have appreciated in value. Now, when you inherit securities or other assets, the cost basis of those assets is “stepped up” to their value on the date of the original owner’s death. If you turn around and sell the securities, you won’t owe any capital gains, even if they’ve increased significantly in value since they were purchased. Former vice president Joe Biden has proposed eliminating the step-up to help pay his higher-education initiatives.

Presidential candidates—and future presidents—who want to increase revenue from estate taxes face some strong headwinds. While the idea of a wealth tax on plutocrats has a lot of support, estate taxes are widely unpopular, even among people who will never have to pay them, says Joseph Thorndike, director of the Tax History Project at Tax Analysts, which publishes information for tax professionals. Many people believe it’s fundamentally unfair to tax inherited wealth, he says. “Lowering the exemption might exacerbate the problem of the tax’s unpopularity.”

The clock is ticking. No matter who is elected president, the generous federal estate tax threshold is living on borrowed time. Under sunset provisions in the 2017 tax overhaul, the current exemption is scheduled to revert to about $5.5 million in 2026 unless Congress moves to increase it.

Ryan Losi, a certified public accountant with Piascik in Glen Allen, Va., says he’s advising clients whose estates exceed that threshold to start planning now. “November will be an indicator of whether it drops down earlier than the sunset,” he says.

If you’re concerned that lower exemptions could reduce the amount you’ll leave to your heirs, there are numerous ways to avoid estate taxes. The easiest strategy is to give away assets while you’re still alive. In 2020, you can give $15,000 to as many people as you want without filing a federal gift tax return. As long as your gifts remain below the limit, they won’t eat into your exemption from federal estate taxes.

If you have a significant amount of appreciated stock or mutual funds in taxable accounts, you can reduce the size of your estate and lower your current tax bill by giving the securities to charity. If you’ve owned the securities for at least a year, you can deduct the fair market value of the securities when you donate them. You won’t have to pay taxes on the capital gains, and the charity won’t, either. If you’re not sure which charities you want to support, a donor-advised fund provides a tax-savvy way to make regular gifts to your favorite causes. These funds, offered by Schwab, Fidelity, Vanguard and other financial firms, allow you to make a large deductible contribution in one year and decide later how to dole out the money.

State estate taxes. These strategies could also help you avoid state estate taxes. Eighteen states have an estate or inheritance tax—which is paid by heirs, rather than by the estate—and in some of these states, the threshold is much lower than the federal exemption is.

President Donald Trump recently changed his residency from New York, which taxes estates valued at $5.74 million or more, to Florida, which has no estate tax (or income tax, either). Other well-off individuals have made a similar move. A recent study published by the National Bureau of Economic Research found that as wealthy individuals age, they’re less likely to live in a state with an estate tax.

Some states have sought to stem the migration by gradually increasing the amount of assets exempt from their estate taxes. But don’t look for states to abandon their estate taxes entirely. The NBER study also found that the loss of revenue from people who moved to other states was more than offset by estate tax revenue from wealthy residents who stayed put.

Saving money is a marathon not a sprint. And even low gas taxes can help keep money in your pocket.
Joint Trusts or Separate Trusts: Advice for Married Couples

Unless you have a specific need for separate trusts, it’s usually best to avoid the headaches they cause and go with a joint trust instead. Here’s why…
Election 2020: States With Tax Questions on the Ballot