Online shoppers who procrastinate get a reprieve, but it may not be free. 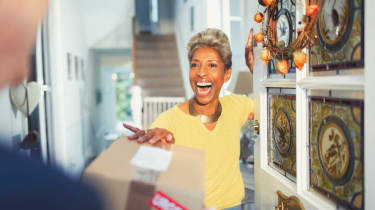 Thanksgiving is late this year, which means shoppers will have less time to cruise the malls. But if you’re getting a late start, you have reason to rejoice: More retailers than ever are offering fast and speedy shipping. The Kiplinger Letter forecasts that online purchases will surge 24% during this year’s holiday season from a year earlier.

But there’s a catch: You’ll have to pay an annual fee at many retailers to take advantage of the fastest delivery. Amazon recently announced that Prime members, who pay $119 a year, will be able to receive their orders in one day instead of two. (Keep in mind that you can still snag free shipping from Amazon on many purchases of $25 or more without a Prime membership. Delivery on those orders usually takes five to eight days, though.) Target recently announced that it will offer free, same-day delivery on orders of $35 or more made via Target.com for shoppers who buy a $100 membership (nonmembers pay $10 per order). Macy’s has announced plans to test free, same-day delivery for orders of $75 or more.

Need groceries for your holiday festivities? Walmart has announced plans to expand its same-day grocery delivery service to more than 1,600 stores by year-end for subscribers who pay $98 a year. Walmart is also testing a service that will allow customers to have fruit, milk and other perishable items delivered directly to their refrigerators. The cost is $20 a month (plus the cost of groceries). Kroger is testing 30-minute grocery delivery in some markets for $5.95 per order.

Shoppers will also likely see more seasonal offers for free, fast shipping during the holiday season, says Rachel Dalton, a director at Kantar Consulting. But you will still need to leave some lead time when buying gifts or placing other time-sensitive orders. Amazon and big brick-and-mortar retailers are in a good position to get orders in on time, says Dalton. But retailers who haven’t beefed up behind-the-scenes systems—including supply chain and inventory tracking—may not be able to manage the volume and deliver on their shipping promises.

SEE ALSO: 25 Best Kirkland Products You Should Buy at Costco

These important time management techniques will help destress your life as you get busier -- yes, busier -- in your golden years.
10 Worst Things to Keep in Your Wallet

Storing your passport book or card, a spare key, or any of these other important items in your wallet leaves you open to identity theft -- or worse.
The Ultimate Guide to Amazon Prime Day 2020: When It Starts, the Best and Worst Deals, Competing Events, More

In a first, the giant retailer has pushed Amazon Prime Day this year from July to October, effectively launching the holiday shopping season weeks ear…