Book Early to Save Money on Holiday Travel 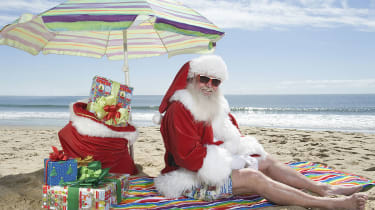 Before your summer tan fades, it's time to start making your holiday travel plans. It might seem a little early, but planning ahead is generally a good way to save money. "As early in advance as you can plan your trip—book your accommodations, rent your car, whatever you need to do—the better pricing and availability you'll have," says Julie Hall, of AAA.

With millions of people pretty much required to trek home for the holidays, fares tend to creep up with nary a last-minute sale in sight. Rick Seaney, of travel site Farecompare, estimates that prices increase by $3 each day you wait to buy starting in September and by $5 a day beginning in October. The average airfare has been around $390 over the past year, according to the Bureau of Transportation Statistics, but of course prices can vary greatly depending on your route.

How much competition should you expect for holiday travel deals? Last Thanksgiving, AAA estimated that more than 46 million Americans journeyed further than 50 miles throughout the long weekend, the most since 2007. For Christmas and New Year's, nearly 99 million people traveled, a record for the period, according to AAA.

In 2015, you can expect to share the experience with even more people. "So far this year, we've seen a lot of travel interest," says Hall. "People are feeling good about the economy and wanting to travel more. Gas prices have been low, so they have extra disposable income. We anticipate a lot of people will hit roads and airways for the holidays, too."

Unfortunately, the very best deals for airfares may have already been booked. Based on 2014 pricing patterns analyzed by travel search site Skyscanner, the best time to buy plane tickets for Thanksgiving, Christmas and New Year's Eve was the week of August 10.

Even once you've booked, it pays to keep an eye on airfares and hotel rates. For flights, federal rules dictate that you can change or cancel your plans without penalty in the first 24 hours after booking. After that, most airlines, hotels and travel agencies still will give you a refund, usually in the form of travel credits, if the price drops below what you paid for the same plans (i.e. the same class of seat on the same flight or the same room type for the same stay).

To make monitoring easy, you can set up price alerts through travel-booking sites such as Kayak and Airfarewatchdog. Yapta and Tingo specialize in such savings, the former for airfares and the latter for hotels. Yapta tracks prices on nine major airlines and lets you know if a price drop outweighs the cost of the ticket change fee, which can range from $25 to a whopping $1,000 on international flights on United. Yapta claims that its services save its members more than $330 apiece, on average, annually. If you book a "price drop room" through Tingo, the site tracks the rates and automatically refunds you if they fall. The average Tingo customer saves about $50 using the service, according to the company. One customer recently posted the biggest price drop refund ever through the site, saving nearly $5,600 on a five-night stay in Hawaii.

When you fly can be just as important as when you book. In general, Tuesdays, Wednesdays and Saturday afternoons are less popular times to fly, meaning flights can be cheaper on those days. But the holidays can change that dynamic. The most expensive departure day for Thanksgiving is the Wednesday before the holiday, according to FareCompare. To catch the lowest fare, your best bet is to fly on the holiday itself. Seaney's recommended itinerary is taking off early on Thanksgiving Day and returning the following Tuesday.

Flying on the big days often works to save money for other holiday travel, too. Especially with Christmas and New Year's Day falling on Fridays this year, the weekends are bound to come with the most expensive fares. Hopping on a trip Tuesday to Friday for either holiday may be your most affordable option.

The same rules apply for avoiding traffic if you opt to drive for your holiday trip. "If you can travel the morning of whatever holiday you're traveling for, that tends to be a little easier on the road," says Hall.