For a Healthy Vacation, Take a Walk

Walking tours offer an up-close and personal view of your destination, with a bonus: You can indulge in gourmet meals without worrying about your waistline. 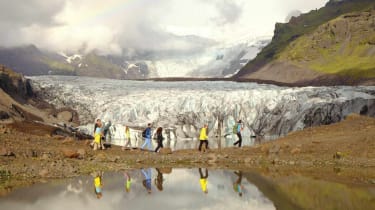 Imagine a vacation in which you immerse yourself in another culture, make new friends and enjoy fabulous cuisine—with no worries that your pants will be too snug when you get home. That’s the appeal of walking tours, a popular vacation option for health-conscious travelers who don’t mind working up a sweat as long as there’s a good meal and a soft bed waiting for them at the end of the day.

You can find a walking tour just about anywhere, from Iceland to Tasmania. In most cases, tour companies arrange for your meals and accommodations—and make sure your luggage is waiting for you when you arrive at each new place. They also provide experienced guides who know the terrain and speak multiple languages.

Veteran walkers say the tours provide an opportunity to experience an unfamiliar culture in a way that’s not possible from the back of a bus or the deck of a cruise ship. Kristie and David Frisbie of Solon, Iowa, had always wanted to visit Machu Picchu in Peru, but they didn’t want to hike the entire 26-mile Inca Trail. In 2013, they signed up for an 11-day tour with VBT Bicycling and Walking Vacations. The trip combined hikes of two to six hours a day with shuttle-bus and train rides. On the sixth day, they had the option of hiking eight miles of the Inca Trail to Intipunku, the original entrance to the “lost city” of Machu Picchu. The hike, which involves steep climbs and walking up and down steps, was challenging, Kristie says. (Guests who want a less strenuous option can take a train to the Inkaterra Machu Picchu hotel, then a bus to the main entrance of Machu Picchu.)

For Kristie, the highlight of the trip was meeting people who live in the Andean Highlands. The trekkers saw demonstrations of potato farming (there are more than 4,000 varieties of potatoes grown in Peru) and wool-dying techniques. They also visited a community center and local school. “We brought stickers and pencils to give to the kids,” she says. “That really was a memorable event for me.”

Even trips in walking-friendly countries usually require some car or bus travel; otherwise, you won’t see much of the area, says Christian Chumbley, regional manager of Backroads, which offers biking and walking tours. The tour operator’s website should tell you how much you’ll walk each day, as well as the amount of time you’ll spend on a bus (or boat).

Kiplinger chief financial officer Corbin Wilkes, his wife, Andrea, and daughter, Hope, spent 10 days walking through Ireland on a National Geographic Adventures tour in July 2015. Although the trip involved some bus rides, the Wilkeses spent most of the expedition—which covered the Wicklow Mountains, Ring of Kerry and Dingle Peninsula—on foot, averaging seven to 10 miles a day.

The Wilkeses chose Ireland because both Corbin and Andrea have Irish ancestors. Meeting the locals was the highlight of the trip, Corbin says. He describes the accommodations as “comfortable, not luxurious.” For example, while in Dingle, the guests stayed in a 60-room hotel that was home to a large Irish pub. The food was excellent, Corbin says—lots of salmon, fresh vegetables, sticky pudding and tarts. On one of the bus rides, their tour guide read a short story by Irish writer Frank O’Connor.

With hundreds of trips from which to choose, your options are limited only by the size of your budget. High-end tour operators such as Butterfield and Robinson, Backroads, and Country Walkers target upscale travelers, with rates typically ranging from about $5,000 to $6,000 per person, not including airfare. These tours appeal to people who like to treat themselves after a day of hiking to a meal at a Michelin-starred restaurant or out-of-the-way café. For example, the itinerary for Backroads’ walking tour of Brittany and Normandy includes a meal at Le Coquillage, a Michelin-starred bistro that specializes in local seafood. For 2017, the tour is $4,298 per person, not including airfare.

On Butterfield and Robinson tours, walkers spend the night in castles, former monasteries and five-star hotels. A tour through the Italian Lakes region that’s moderately challenging—usually five miles a day, with some steep trails—costs about $6,300 per person, not including airfare. Accommodations include the Villa Serbelloni, a five-star hotel on Lake Como, and Villa Castagnola, an Italian-style villa surrounded by exotic gardens.

Walkers with more-modest budgets should check out Road Scholar, which has been providing tours for adults age 50 and older since 1975, when it was still called Elderhostel. Road Scholar offers about 160 walking and hiking trips at prices ranging from about $1,000 for a six-day tour in the U.S. to about $5,200 for a 16-day walking expedition through five of Tasmania’s national parks (airfare not included). All trips have an educational focus. For example, a nine-day tour of the hill towns of Umbria in Italy includes visits to a medieval paper manufacturer, a Roman aqueduct and the medieval town of Bevagna. The tour runs about $2,097 per person.

Louisa Mattson, 67, was on the Umbria tour last April. The tour included a truffle-hunting demonstration, which Mattson says was the highlight of the trip. The farmer used dogs instead of pigs because, he explained, pigs do too much damage to the terrain. Mattson, who has gone on seven Road Scholar expeditions, says the two-hour traditional Italian lunches were also memorable. “That’s why I like hiking trips,” she says. “You can eat whatever you want.”

Some tour operators offer package deals that include airfare. That could save you money, depending on where and when you go. Country Walkers’ Yeaton-Masi says the company can often negotiate lower airfares than its customers can get on their own. One advantage of booking a package deal is convenience: The tour operator will usually pick you up at the airport, and the group probably won’t leave without you if your flight is delayed. If you book your own trip, you may want to arrive a day early to avoid being left behind, says Sarah Schlichter, senior editor of IndependentTraveler, a travel review website. Look up the cost of booking your own flight to see which option offers the better deal.

Blazing your own trail

Most walking tours have fewer than 20 people, and many travelers enjoy the camaraderie of walking with a group. But if you prefer a more intimate trek with your spouse, friends or family, consider a self-guided tour. These tours typically include luggage transport, accommodations and some meals, but instead of a guide, you get a map. At Country Walkers, these are the fastest-growing types of tours, Yeaton-Masi says. “If you want to do all of your walking in the morning, you can do that,” she says.

Self-guided tours are less expensive than group tours because the tour operator doesn’t have to provide guides. For example, Country Walkers’ nine-day self-guided tour of Camino de Santiago, an ancient pilgrimage route in Spain, costs $3,698 per person (not including airfare), compared with $5,998 for its guided tour. When comparing prices, keep in mind that self-guided tours usually cover fewer meals than the guided versions.

Randonnee Tours specializes in self-guided tours, with destinations in North America and Europe. Owner Robbin McKinney says the company’s customers are usually people who have traveled enough to feel comfortable going it alone but still want some behind-the-scenes support. Travelers can select the dates for their walks (within a specific window, such as May to October) and stay in casual (bed-and-breakfasts), classic (family-run four- and five-star hotels) or five-star deluxe accommodations. Costs are significantly lower than those for guided tours, though not all meals are included. For example, an eight-day self-guided tour of the Provence region of France costs between $1,320 and $1,670 per person, depending on the accommodations, compared with $4,898 for Backroads’ six-day Provence guided excursion. Eight breakfasts and two dinners are included in the Randonnee tour.

Daily treks may help keep your weight down and increase your stamina, but don’t expect to return from your vacation with a dramatically thinner waistline. On average, walking burns about 100 calories per mile, so unless you plan to hike across England, you probably won’t come home a size smaller. But if you decide to make walking a part of your regular routine, the health benefits will continue long after you’ve put away your hiking boots. In fact, a new study described in a recent issue of the Tufts University Health & Nutrition Letter reports that sedentary individuals who increased their steps from 1,000 to 3,000 a day reduced their mortality risk by 12%; those who achieved 10,000 daily steps cut their risk by 46%. Published in PLOS One, a scientific journal, the study followed more than 2,500 Australians with an average age of about 59 for more than 10 years.

As soon as you sign up for a walking tour, “you’re making a decision for your health,” VBT’s Skilling says. “I know people who have come home from their vacation thinking that the 10-day period changed their lives.”

Preparing for your trip

You don’t need to be an endurance athlete to go on a walking tour, but you’ll have a more enjoyable trip if you start walking regularly before you go. Try to work up to the maximum number of miles you’ll walk in a day during your tour, says Independent Traveler’s Sarah Schlichter. If the trip requires some uphill climbs, try to find a walk or trail that has some elevation, too.

You may not need hiking boots for a walk that’s primarily on paved paths, but if you’re going to be traveling on elevated, rocky paths, you’ll probably need stiffer shoes with ankle protection. Before you leave for your tour, wear your shoes or boots on walks to break them in.

Most group tours stick to the schedule even if the weather turns nasty, so bring rain gear. Your tour operator will provide other tips on what you’ll need.

From laptops to loudspeakers to, yes, shoes. Check out the latest gee-whiz to make an impression during gift-giving season.
19 Best Costco Kirkland Signature Products to Buy for the Holidays

Sometimes spending a little more on quality ultimately saves you money by saving you time, improving your health or just making you happier. The trick…