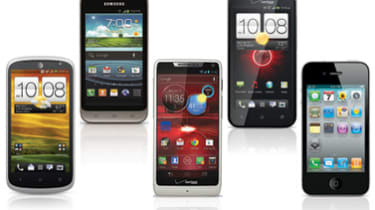 Not long ago, cheap smart phones were, to put it not so mildly, junk. For less than $100, you pretty much got what you paid for: a low-resolution screen, a crummy camera and poky perform­ance. No more. Today, you can find some excellent smart phones for $50 or less -- as long as you’re willing to sign a two-year contract. If that’s a trade-off you can live with, these bargain handsets are worth checking out.

See Our Slide Show: 10 Ways to Make Your Smart Phone Pay for Itself

Fast, sharp and cheap. The thin-and-light HTC One VX (99 cents in red, $50 in white with a two-year AT&T contract) features a 4.5-inch high-definition display with a respectable 245 pixels per inch. (The higher the PPI, the better the image quality.) The One VX runs Android 4.0, which may not be the newest version of Google’s mobile software but is almost as fast and powerful. In addition to 4G LTE wireless and 8 gigabytes of internal storage, the One VX has a microSD card slot for adding as much as 32GB of memory. It sports a decent 5-megapixel rear-facing camera and a low-resolution camera on the front.

The Samsung Galaxy Victory ($50 after rebate with a two-year Sprint contract) is also a 4G phone that runs Android 4.0. It has a 4-inch HD display with 233 PPI. Its 1.3-megapixel front-facing camera is fine for video chats, and the 5-megapixel rear camera is acceptable for casual shots. The Galaxy Victory boasts a few cutting-edge tools, notably Samsung’s S Beam, which in combination with the built-in Android Beam uses NFC (near field communication) technology to let you share contacts, photos, videos and links by simply tapping two comparably equipped phones together.

The HTC Droid Incredible 4G LTE ($50 online with a two-year Verizon Wireless contract) has a 4-inch LCD display, an 8-megapixel rear-facing camera and a low-res front-facing cam. It runs Android 4.0 and is NFC-equipped. Despite its advanced age -- Verizon launched the Droid Incred­ible in July 2012 -- it is a solid, dependable phone.

Cheaper still. Carriers’ so-called free handsets are usually older models making a final run before departing for handset heaven. (Of course, they’re not really free because the price of the phone is amortized over the life of the two-year contract.)

Verizon’s menu of free phones includes the vener­able Apple iPhone 4. Ahead of its time when it launched in 2010, the iPhone 4 is now old hat, with its 3.5-inch display and 3G performance. Still, it’s a beautifully designed phone with a 326 PPI screen, and Apple’s App Store is stockpiled with hundreds of thousands of helpful applications.