What to Do in Case of Financial Emergency

If you have yet to build up an emergency fund, consider these options to help cover any big, unexpected costs. 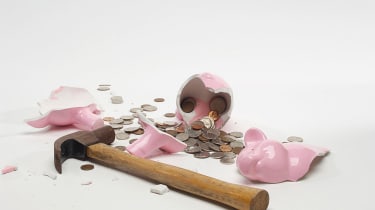 Sooner or later, you're bound to get hit with an unexpected and eye-popping cost. Maybe a hospital stay will slam you with thousands of dollars in out-of-pocket charges, expensive car repairs will take you for a ride or Uncle Sam will send you a hefty tax bill. Ideally, you've stashed at least six months' worth of living expenses in a savings account to help in situations like these (or in case a job loss stunts your income for a while). But especially for young people who haven't had much time to save, sometimes the cash isn't there.

You may be tempted by easy sources of money that will actually bury you deeper in debt. For instance, a payday loan requires you to pay back the full loan amount from your next paycheck. Sounds simple, but it could come at an annual interest rate of about 400%, according to The Pew Charitable Trusts, and borrowers often struggle for months to pay back the loans. Another costly option is a cash advance through your credit card. You'll usually pay a fee of 3% to 5% of the amount you withdraw or $10 — whichever is higher — and the interest charge is often 20% or more. On top of that, interest accrues immediately, rather than after a grace period has passed as with a standard credit card purchase.

Instead, consider four smarter ways to pay for emergencies when you don't have an emergency fund.

(Once your current crisis has passed, take some time to evaluate how to prepare for the next big expense, says certified financial planner Brenda Knox, president of Financial Elements. Even on a tight budget, you can find ways to save money, such as cutting out small, discretionary expenses. For more tips, see 7 Strategies to Build an Emergency Fund.)

See whether you can set up a plan that would allow you to spread payments for the bill over a few months or more. "Most industries that commonly create large and unexpected expenses have payment-plan options. You just have to ask about them," says Alan Moore, a certified financial planner in Bozeman, Mont.

Some hospitals, doctor's offices and dentist offices set up payment plans with patients. The IRS allows those who can't pay a tax bill in full to make monthly payments through an installment agreement. Before you seal the deal, consider the interest rate and other fees you may be charged. With the IRS installment agreement, for example, you will pay a setup fee, which varies depending on your income and how you pay, as well as interest (the federal short-term rate plus 3%, adjusted quarterly) and a monthly 0.25% late-payment penalty.

You could also try to negotiate for a lower bill. A hospital, for example, may accept less than you owe if you hand over a lump sum rather than make monthly payments. Don't be afraid to explain that you're just getting on your feet financially. Small businesses may be especially flexible and sympathetic to a young person starting out, says Knox.

Going to your parents for money isn't an earth-shattering idea. The trick is to put some thought into it. First, consider whether they are in a position to assist you. Your parents shouldn't have to go broke financing your bailout, after all.

If you decide to ask them for help, figure out how much you would like to borrow, the term over which you would repay a loan and the interest rate you would pay, says certified financial planner Cheryl A. Costa, a principal at Forteris Wealth Management. "Parents usually have cash sitting in checking or savings accounts earning next to nothing," she says. "If a child pays an interest rate of 2% to 3%, it's a win-win."

Once you come to an agreement, put it in writing. Both you and your parents should sign it — and it's not a bad idea to have a third-party witness present in case there's any dispute in the future, says Megan Rindskopf, a certified financial planner with Clearview Wealth Management. Or you could use a site such as LendingKarma.com or LoanBack.com (each charges $30 for a basic package) to set up a loan, including a payment schedule and e-mail reminders. (Bonus: Even if your parents are willing to be less formal with a loan, you'll probably get brownie points for coming to them in such a mature, responsible manner.)

Pulling money from retirement savings isn't optimal. But the good news about tapping a Roth IRA is that you can withdraw contributions that you've made to the account without incurring taxes or penalties. (If you withdraw earnings on your investments in the account, however, you could be hit with taxes and penalties. For more on IRA withdrawal rules, see 8 Reasons You Need a Roth IRA Now.)

Some advisers recommend that young people steer clear of credit cards in a pinch. For one, the interest charges can get ugly. If you put $3,000 on a card with a 22% interest rate, for example, and made a $90 payment each month, it would take more than four years to cover the bill—and you'd pay $1,679 in interest along the way. (Use Bankrate's Credit Card calculator to test other scenarios.) Plus, falling behind on payments or creating a high level of debt as a proportion of your credit limits could cause your credit score to suffer.

If you have good credit, a reliable stream of income and the ability to pay off your debt within a year or so, opening a credit card with a 0% introductory annual percentage rate might work for you. But at the end of the introductory period (often up to 18 months), the rate will jump—sometimes to as high as 22%, depending on your creditworthiness. Think carefully about whether you can pay off the balance on time before you go this route. And be aware that if you apply for a few credit cards in a short period, your credit score could take a hit.

If you don't have to use your stimulus check for basic necessities, consider putting the money to work for you. You'll thank yourself later.
The Finances of Homeschooling Your Kids: What It Costs, Tax Breaks, More