Not all plastic is bad for kids, but using cash is the best way to get young minds thinking wisely about money. 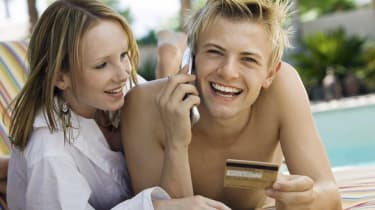 Stories about outrageous teen spending—and spending among even younger kids—are popular in the media. And when a media outlet publishes such a story, I often get a request from some other media outlet to comment on just how outrageous it is.

One recent example was a piece in the New York Post about tweens flashing their plastic in New York City and its upscale environs. For example, there was the story of 14-year-old Rebecca, who swipes her Chase Visa card twice a day in taxis to and from school and routinely adds a 20% tip. When she and her friends do dinner at restaurants such as Serafina and Nobu, they often split the bill, with each of them throwing in her own credit card. “I know of parents who hand over the Black Amex to kids of all ages, and there are no rules or limits imposed,” says one East Side mom. “In New York, it’s not unusual to find a 14-year-old picking up the $2,000 tab for a dinner for 10 friends.”

QUIZ: Will It Sink Your Credit Score?

It would be easy to dismiss such behavior as more typical of Upper East Siders than your average parents. But it does raise a basic question of how most sensible parents should let their children handle plastic.

First, let’s get some terms straight. In my lexicon, prepaid cards are those that have a finite value loaded onto them and are reloaded when the money runs out. Debit cards are more open-ended and are generally tied to a checking account. And then there are traditional credit cards.

I’ve never been a fan of prepaid cards for children. These cards often come loaded with fees, and it seems to me that their main purpose is to make it easier for kids to spend money. Plus, it has been my experience that kids tend to see them as a direct line to a parent’s wallet, to be topped off automatically when empty.

If they’re used at all, I think prepaid cards are most suitable for special situations, such as when a young teen is managing his or her earnings from a part-time or summer job, or a student goes out of town on a class trip. (If you go the prepaid route, Kiplinger likes the Bluebird card from American Express and Walmart, which has no monthly fee.)

Overall, I think the best way to teach older teens the discipline of managing a stash of real cash, especially if they’re earning their own money or going off to college, is a regular checking account that is linked to a debit card. They can avoid hefty overdraft fees by not giving the bank permission to enroll them in its overdraft protection plan. That means ATM withdrawals and debit transactions could be declined (except for checks) and cause some embarrassment, but the accounts will stay in the black.

Credit cards should be off-limits until young people have proved they’re mature enough to pay bills on their own (think rent for college students) without overdrawing their checking account. Once they’re 21, they can apply for a card on their own.

That would rule out credit cards for those New York City tweens. For kids younger than 21, parents must cosign for a card or name their child as an authorized user. I don’t like the idea of putting your credit rating on the line if your kid screws up.

What really bothers me, though, is that parents often justify their actions by saying that giving kids a card teaches them financial responsibility and independence. Yet Rebecca’s mom admits she doesn’t mind all those taxi fares that her daughter runs up because she gets the rewards points on her card.

Parents need to think like kids, rather than use adult logic or consider their own convenience. As long as parents are picking up the tab in some way—as almost always happens with children this age who don’t have income of their own—they’re kidding themselves if they think their kids are learning personal responsibility. Just ask 15-year-old Jacob, who admits he’s much more cautious when he shops with the money he makes doing odd jobs in the neighborhood. “The cash is my own money, and I’m a little bit more conscious spending my own money.”

Tax breaks aren't just for the rich. There are plenty of them that are only available to middle- and low-income Americans.
Find the Best Money Market for You
money market accounts