Parents shouldn't use money to motivate kids to help out around the house.

I recently heard from Laurel, a writer who had interviewed me for a story about allowances and then contacted me as a parent with a perplexing personal problem. “When I gave my 5-year-old a quarter for putting away his little brother’s laundry (a task that is above and beyond my expectations of what he needs to do), he then started to look for endless ways to make money.

“I appreciate his motivation, but it gets annoying. I feel like he becomes super money-centric and loses track of a purer motivation -- doing things just to be helpful. Any ideas for giving an allowance that addresses this issue?”

I’m intrigued by Laurel’s question for a number of reasons. First, it stands the usual allowance issue on its head -- instead of trying to motivate a kid with money, this parent is trying to de-motivate her son. Her situation highlights one of the problems of tying allowance to chores: Kids can turn into little money grubbers who expect to get paid all the time. (As kids get older, this can morph into a related issue: Parents who depend on cash to motivate their kids have to keep raising the stakes and eventually lose their leverage.)

Laurel also seems to have run into a snag because she was trying to follow one of my allowance guidelines (see The Last Word on Kids and Cash). I recommend that parents not pay their kids for basic chores, which they’re expected to do just to be helpful, but allow them to earn extra money by doing extra jobs.

It may be that Laurel’s son is a little too young. A good time to start paying for extra jobs is when kids are 6 or 7 and learning about money in school, so they can make the connection between how much they’re getting and how far it will go.

Also, preschoolers tend to have short memories and attention spans, so Laurel’s problem may be self-correcting. If Laurel wants to stick with the program, she could draw up a list of four or five chores for which her son can earn an extra quarter and leave it at that.

The principle is that kids should do basic chores, such as cleaning their room or helping unload the groceries, because they’re asked to, not because they’re paid. Plus, over the years I’ve learned that many parents have a tough time keeping track of whether their children have actually done their assigned jobs. A survey by DoughMain, a financial-education and family-organization Web site, found that 89% of parents say they assign chores to their kids, but only 29% use some kind of formal system, such as a chore chart or written list, to track them (DoughMain and Tykoon, another kids’ finance site, have online chore trackers).

No handouts. But here’s the critical point: An allowance shouldn’t be a handout. Tie the basic allowance to “financial chores” -- spending responsibilities that the kids take over from you. You could start by having them pay for their own collectibles, for example, or refreshments at the movies. The beauty of the system is that as your kids get older, you can expand their allowance and their responsibilities (see my upcoming column on clothing allowances).

To make the connection between work and pay, give your children the opportunity to earn money by doing extra jobs, such as taking out the trash or the recycling, vacuuming the family room, raking leaves, washing the car, or whatever you define as service above and beyond. (To avoid being caught in a situation like Laurel’s, be specific about what you’ll pay for.)

I think this two-tier system has three pluses: It’s easy to keep track of, it sets up a sensible -- and workable -- arrangement for tying allowance to chores, and it’s an effective way to teach kids how to make decisions about managing their money. 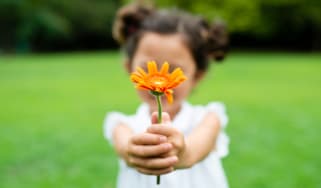 You’ve decided to fund a Uniform Gifts to Minor Account, but have you thought about how to make sure that legacy will be secure?
6 Money-Smart Ways to Spend Your Stimulus Check