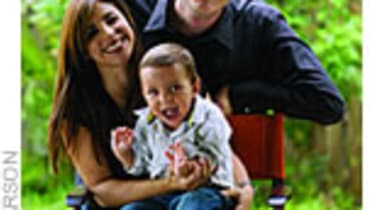 OUR READERWho: Todd Thompson, 37What: Creative developerWhere: OrlandoMarital status: MarriedSymptom: Wants to be financially secure so he can eventually go out on his own. Ultimately hopes to be a movie mogul.

Olga and Todd Thompson are blessed with a beautiful 1-year-old son, Ethan, a lakefront home in Orlando and a concentration of artistic talent. Todd, an actor, filmmaker and screenwriter, works as a creative developer for Disney theme parks. Olga, 33, is a freelance graphic artist and commercial photographer.

This sweet life has only one complication: money. Earnings from Todd's job and Olga's photo business pay the bills. But although Todd enjoys his work, he aspires to make it as a full-time filmmaker someday. He's a partner in an indie production company, where he works nights and weekends. The company has released several acclaimed short films and is seeking investors to develop full-length features.

Making movies "is definitely a life passion of mine, a career I could pursue to my last days," Todd says. But before Todd can pursue his ambition, he needs to attend to his son's needs and his and Olga's retirement.

Todd and Olga are starting out well, with $135,000 in retirement funds, an ample savings account and little debt. Their mutual funds are mainly growth-oriented. Their house is worth as much as they owe. The wild card is investment real estate. A few years ago, Todd bought three condominiums and a townhouse in the Orlando area. He has kept them occupied and says he's breaking even on cash flow. Todd acknowledges that half his paper profits disappeared in the real estate downturn, but he retains about $200,000 in equity.

Advisers cringe when they see clients with more assets in rental real estate than in stocks and bonds. But even with capital-gains tax rates as low as they are, Todd should hold for now, says Roger Wohlner, of Asset Strategy Consultants in Arlington Heights, Ill. "Set up a stress test. I'd build in a 20% vacancy rate and see if he could handle it." If not, Wohlner says, Todd should "get out and diversify" once buyers re-emerge and property values stabilize.

Todd's film company represents a second enterprise. Yet, for a new parent, the best security is a full-time job with a strong employer that offers a steady paycheck, health benefits and a 401(k) with a match, says Sheryl Garrett, founder of the Garrett Planning Network. She applauds Todd's ambition, but in this situation, she says, "you have to have a paycheck coming in." Garrett says that for Todd and Olga to be able to retire comfortably, they need to amass a savings kitty that can generate enough investment income to cover 100% of their yearly fixed living expenses.

That's a tall order, but it shouldn't stop Todd from putting his heart into his filmmaking. Who knows? Maybe he'll produce a movie that mints money. Or maybe Disney will find a role or two for a young man who's been in The Green Mile, The Waterboy, several science-fiction flicks and a few TV series.

Stumped by your investments? Write to us at portfoliodoc@ kiplinger.com.

A new chiropractor’s fledgling business plan to attract patients may sound reasonable at first look, but it’s actually against the law, and the same p…
Find the Best Money Market for You
money market accounts

Whether you choose a money market fund or account largely depends on the money's purpose.
Post-COVID-19, Seniors Must Chart a New Path in the Workplace

Those most vulnerable to the pandemic will face challenges in the return to work, even as the recession means they may need their paychecks more than …
Skip to ContentSkip to Footer